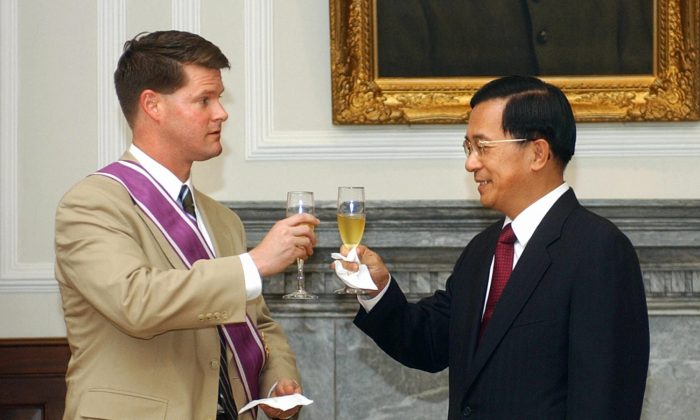 In this file photo, the Former US deputy assistant secretary of state for East Asia and Pacific affairs Randall Schriver (L) toasts with then-Taiwan's President Chen Shui-bian during a meeting at the Presidential Palace, July 12, 2005 in Taipei. President Donald Trump has nominated Schriver, who enjoys a reputation as a strong supporter of Taiwan, to be assistant secretary of defense for Asian and Pacific Affairs. (JEROME FAVRE/AFP/Getty Images)
Asia & Pacific

WASHINGTON–Trump’s nomination of a Taiwan-friendly Asia policy expert to a key post at the Pentagon has raised expectations that the administration will bring closer ties between the United States and Taiwan, especially in security-related areas. The long speculated appointment has been received warmly by the Taiwanese side as well as some experts who have long called for a renewed attention to Taiwan and other allies and partners of the United States in Asia-Pacific region.

The White House announced on Oct. 27 that Randall Schriver, a founding partner of international consulting firm Armitage International, as well as the CEO and President of the think tank Project 2049 Institute, is being nominated to the key post of assistant secretary of defense for Asian and Pacific Affairs. In that position, Schriver will lead the Pentagon’s outreach on issues in the Asia-Pacific region.

Schriver had previously worked as deputy assistant secretary of state for East Asian and Pacific Affairs during the Bush administration from 2003 to 2005. Before that, he served for two years as chief of staff and senior policy adviser to Richard Armitage, then deputy secretary of state, from 2001 to 2003.

Schriver has been talked about for a key position in the Pentagon for months. In April, Defense News speculated the veteran Asia policy hand was a potential candidate for undersecretary of defense for policy. The same report also quoted a former official who described Schriver as a “very solid” candidate for the policy position.

Schriver is known for his long-time working relations and friendship with Taiwan, which trace back to his experience interacting with the island nation while serving under the Bush administration. The White House announcement mentions that Schriver is a recipient of Taiwan’s Order of the Propitious Clouds for his service in promoting relations between the two sides, which was awarded to him by then-President Chen Shui-bian in 2005.

Schriver’s nomination has been warmly welcomed by Taiwan’s government officials, with the spokesman for the Ministry of Foreign Affairs looking forward to the boosting of U.S.-Taiwan relations with Schriver’s appointment. Lo Chih-cheng, a Taiwanese legislator who is considered a rising start in the Democratic Progressive Party, described Schriver as “a friend of Taiwan.”

Russell Hsiao, the executive director of Global Taiwan Institute said that Schriver’s nomination is long overdue and provides much needed expertise on Asia for the Trump administration. “Randy’s prior government experiences… will help to assure Asian allies and partners of US commitments and staying power in the region during a period of increased uncertainty,” said Hsiao.

After Trump’s controversial phone call in December 2016 with Tsai Ing-wen, then President-elect of Taiwan, Schriver and fellow Asia policy expert Dan Blumental of the American Enterprise Institute co-authored a piece published in The National Interest that argued that “higher-level engagement with Taiwan serves U.S. national interests and values.” The article praised Trump’s call to Taiwan as “a good first step toward rebalancing a trilateral China-Taiwan-U.S. relationship that has been increasingly defined by the People’s Republic of China.”

Defense News noted Schriver’s leadership of Project 2049 Institute, a think tank with the goal of “guiding decision makers toward a more secure Asia by 2049.”  The Arlington, Virginia-based think tank is well-known for detailed, critical studies of the Communist Chinese regime and its People’s Liberation Army, many of which have been widely cited by other policy researchers and news reports.