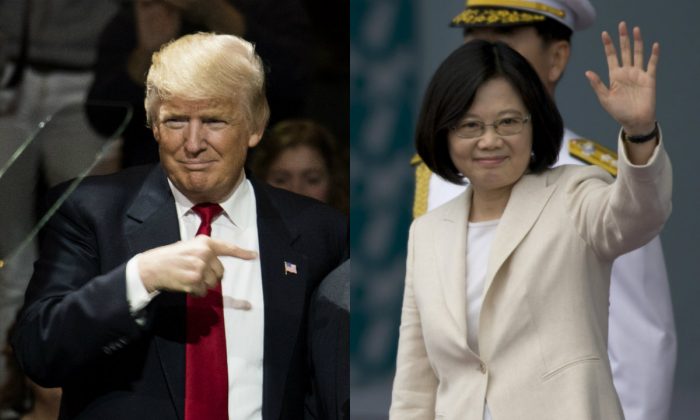 NEW YORK—President-elect Donald Trump spoke Friday with the president of Taiwan, a move that has turned heads because the Chinese communist regime has tried to isolate the island democracy from the international community.

It is perhaps unprecedented since the United States broke diplomatic ties with Taiwan in 1979 under pressure from the Chinese regime for a U.S. president or president-elect to speak directly with a leader of the self-governing island. Since 1979 the United States has continued to support Taiwan with military sales. China is Taiwan’s only significant military threat.

A statement from Trump’s transition team said he spoke with Taiwanese President Tsai Ing-wen, who offered her congratulations. It was not clear who initiated the call.

Shaquille O’Neal: Time to Give Trump ‘A Chance’

“During the discussion, they noted the close economic, political, and security ties exists [sic] between Taiwan and the United States. President-elect Trump also congratulated President Tsai on becoming President of Taiwan earlier this year,” the statement said.

A Taiwanese source with direct knowledge of the call confirmed it had taken place. The source requested anonymity to speak about it before an official statement was issued on it from Taipei.

China’s embassy in Washington did not immediately respond to a request for comment.

Although the United States does not have formal diplomatic ties with Taiwan, it has close unofficial ties. Taiwan’s government has a representative office in Washington and other U.S. cities. The U.S. also has legal commitments to help Taiwan maintain the ability to defend itself.

Tsai was democratically elected in January and took office in May. The traditional independence-leaning policies of her party have strained relations with Beijing.

Diplomatic protocol dictates that Taiwanese presidents can transit through the United States but not visit Washington.