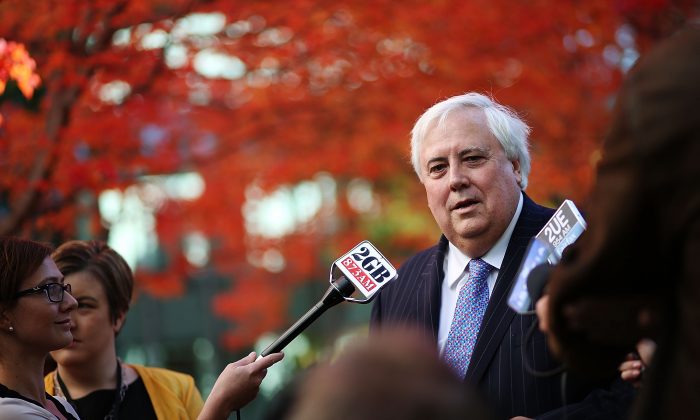 Clive Palmer has finally stumped up A$7 million to pay out the entitlements of sacked Queensland Nickel workers.

About two weeks ago, Palmer said he’d cover A$7.16 million in entitlements still owed to workers who lost their jobs when his nickel business collapsed with massive debts.

About a week ago, he told reporters the money would be paid into a trust account today, with a solicitor appointed to process any claims.

Palmer said the payment was an act of goodwill, and he was offering the money because he wanted to, not because he had to.

“Although I was just a shareholder of the holding company of Queensland Nickel at the time, with no personal liability, I had arranged a payment of $7 million for that purpose to be paid in a solicitor’s trust account so he could pay all the workers,” Palmer said on Monday afternoon.

“That payment has been made and he’s currently dealing with the claims that have been received.”

Palmer has come under fire for not paying outstanding worker entitlements while spending tens of millions of dollars on federal election advertising for his United Australia Party.

Earlier on Monday, the businessman said his party’s advertising spend would roughly match what Labor and the coalition had spent in the past.

“Well the Liberal, Labor party have spent between $50 and $60 million in the last election and I think we will be spending roughly about the same by the time of the election,” he told Nine’s Today program.

He also denied he was in financial strife and, when asked what he was worth, cited “recent polls” in The Australian putting his fortune “at about $4,000 million.”

“I’m in terrible strife, it is really difficult,” he quipped.

Palmer was less generous when asked if he’d pay back almost A$70 million in entitlements covered by Australian taxpayers when the nickel business folded.

The federal government stepped in to meet those debts and then appointed liquidators to purse Palmer for the funds.

But Palmer said that debt was not his to bear and that Queensland Nickel’s administrators are responsible because they refused his offer to keep the Townsville nickel plant open.