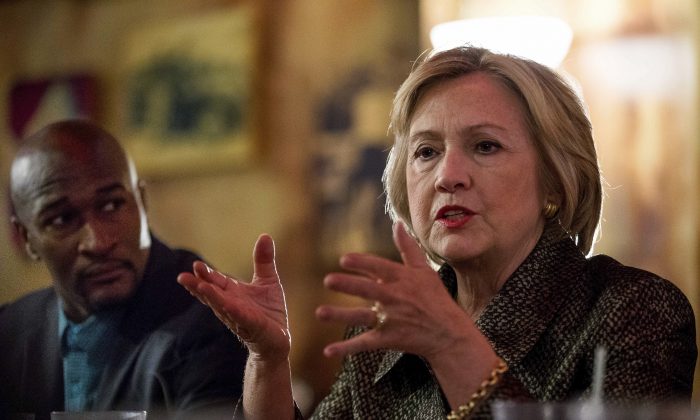 Hillary Clinton was asked about whether she joked about targeting Julian Assange, the founder of anti-secrecy website WikiLeaks, with a drone strike.

“I don’t recall any joke,” Clinton said when she was asked about the allegations. “It would have been a joke, if it had been said, but I don’t recall that,” she said in remarks delivered at a conference in Harrisburg, Pennsylvania, on Tuesday, according to Politico.

According to the report, Clinton’s suggestion drew laughter from the room but then quickly died off when she kept talking in a terse manner. The alleged sources added that Assange was a soft target who was “walking around” freely.

The report has not been corroborated by any mainstream media outlets.

Clinton campaign manager Robby Mook told WTTG-TV that he’s “reticent to comment on anything that the WikiLeaks people have said.” Mook added, “They’ve made a lot of accusations in the past.”

In July, WikiLeaks published more than 19,000 emails from top officials in the Democratic National Convention (DNC), which included names, addresses, and phone numbers. They suggested that Clinton’s then-rival in the primaries, Sen. Bernie Sanders, was pushed to the wayside in favor of Clinton. The discovery led to the resignation of chairwoman Debbie Wasserman Schultz and other DNC officials.

The source of the leak was not disclosed, as is WikiLeaks’ policy, but some U.S. officials claimed Russian hackers were behind the breach.

According to the Politico report, the same reporter asked Clinton on Tuesday about whether any more potential leaks from Assange would impact the race. “Well, I don’t know anything about what he’s talking about,” Clinton said.