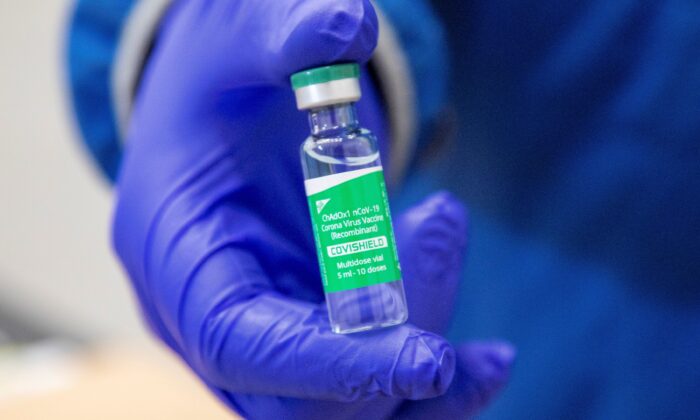 A vial of some of the first 500,000 of the two million AstraZeneca COVID-19 vaccine doses that Canada has secured through a deal with the Serum Institute of India in partnership with Verity Pharma at a facility in Milton, Ont., Canada, on March 3, 2021. (Carlos Osorio - POOL/The Canadian Press)
By Noé Chartier

The under-reporting of adverse events linked to COVID-19 vaccination is caused by clinical, political, systemic, and media factors, says a recent study, which leads to misguided recommendations by authorities.

“The relative prevalence of side effects following COVID-19 vaccination is largely underestimated and does not correspond to reality,” says its author Patrick Provost, a full professor in the Department of Microbiology, Infectious diseases and Immunology at the Faculty of Medicine of Université Laval in Québec City.

The peer-reviewed study was published in the International Journal of Vaccine Theory, Practice, and Research on Jan. 12 and is titled “The Blind Spot in COVID-19 Vaccination Policies: Under-Reported Adverse Events.”

Provost says the study was predicated on two academic scientists in good health suffering from several adverse events (AEs) after a COVID-19 injection and then facing denial from responding physicians.

This led them to formulate the hypothesis that AEs may be under-reported and by extension underestimated.

“Their concerns for their own health, given their background knowledge, training, and investigative mindset, put them in a unique position to testify concerning deficiencies in AE reporting following COVID-19 injections,” says the study.

One scientist is reported as suffering from five different AEs, including ophthalmic migraines, skin rashes, and diabetic imbalance.

The treating endocrinologist never acknowledged the COVID-19 shot could be responsible and instead recommended another dose. He also did not report the AEs to health authorities despite being asked to do so in writing repeatedly.

Eventually a general practitioner reported the AEs under the guidance and assistance of the scientist-patient, says the study.

The other scientist visited the emergency care unit three times with heart issues and was diagnosed with myocarditis and postural orthostatic tachycardia syndrome (POTS), a blood circulation disorder.

No medical doctors would admit to a link with the injection which had taken place days earlier, and instead focused on what the patient had eaten two years prior. The physicians attributed the symptoms to “anxiety.”

It was finally a nurse who reported the symptoms as potential AEs following vaccination.

“Authorities have yet to explain to the population how an intramuscular injection of a product said to be safe in shoulder can lead to significant health complications in other parts of the body, such as heart inflammation,” Provost told The Epoch Times, alluding to the conditions of myocarditis and pericarditis.

He says the injection of mRNA and lipid nanoparticles, following a process diametrically opposed to traditional vaccines, can be distributed throughout the body.

“The vaccine mRNA can hence be internalized by any of our cells by giving it instructions to produce the viral Spike protein, which is toxic and foreign, and can lead the immune system to turn on its host and facilitate the development of reactions and auto-immune illnesses.”

The study identified a large number of factors that can lead to the under-reporting of adverse events (AEs), classifying them in the categories of clinical, systemic, political, and media.

Among the clinical causes, it says that physicians have a lack of openness to consider the impacts of COVID-19 injections and a belief they can’t be responsible.

It also notes issues of peer pressure and reliance or “blindly following” the policies of their colleges.

Physicians are not the only ones faulted, with another factor listed as the “lack of knowledge or interest of the patients about human biology or their own health.”

Other clinical factors include the voluntary nature of AE reporting, the time required for the already overloaded physicians to fill the 5-page government reporting form, and the “lack of hindsight and critical thinking about the new genetic vaccines.”

The study notes numerous systemic factors affecting the reporting of AEs, such as the misleading of the public to believe the rapidly deployed injections are as safe as traditional vaccines tested over decades.

It singles out the “safe and effective” “mainstream narrative” pushed by authorities and media which can discredit individuals raising questions, and notes how colleges can threaten and suspend their members who step out of line.

The study says governments are also “bypassing physicians and breaking the doctor-patient relationship through mass vaccination, which makes physicians unable to systematically and clinically follow up their vaccinated patients.”

Among the political factors, the study notes that government officials are rarely challenged by opposition parties on the matter of vaccine safety and that Quebec public health agency (INSPQ) directors are political appointees.

Provost suggests this can lead to a reduced autonomy for experts to investigate AEs and he questions if the INSPQ can produce opinions independent of political decisions and narrative.

The INSPQ told The Epoch Times it wouldn’t comment on the article.

Among the media factors listed, the study notes the widespread claim that COVID-19 injections are safe, the downplaying of potential risks, the low coverage of AEs and their victims, and lack of encouragement to report AEs.

It adds as a factor the “the disregard and damage to the reputation of independent scientists expressing dissident views and critical analyses, in order to maintain social cohesion and preserve the single message of safety and effectiveness.”

This last point Provost experienced personally, when an article he wrote for media group Québecor was taken offline one day after its publication last summer.

Provost had criticized the province’s management of the pandemic by noting how the elderly and sick were mostly the only group at risk from COVID-19.

Québecor explained its decision by saying it favours debate but elements of Provost’s letter were “inaccurate or could mislead the public.” The media group did not provide any evidence to support the claim.

A few days earlier, Provost had been suspended for eight weeks by Laval University for saying there’s no real benefit to vaccinate children against COVID-19.

Provost and his union, which support him, were supposed to participate in arbitration hearings this week regarding the suspension but they were postponed.

Laval University is mulling over a new suspension after receiving another complaint against Provost over the summer regarding similar comments he made on a radio show.

“The effectiveness of vaccines is negative in Quebec since December 2021 (the government deleted this data from its reporting not long after…). This means you have more risk to get infected if you’re vaccinated,” Provost wrote in a Facebook post commenting on his appearance on the show.

Quebec public health was effectively reporting at the time that the vaccinated were more likely to get infected and stopped sharing this data point on Jan. 5.