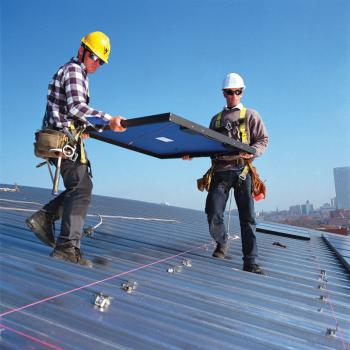 The Earth’s Warming Trend Must Be Reversed, Say Scientists

WASHINGTON, D.C.–Climate change has been around in the public consciousness since the 1980s, but lately, the issue of global warming has taken on a new urgency. Perhaps nowhere on the planet is the problem of climate change and the urgency for constructive climate action felt more than by the scientists and thinkers at the Worldwatch Institute, which just released its annual report, State of the World 2009: Into a Warming World.

At a press conference on Jan. 13, to mark the occasion of the book’s release, Worldwatch President Christopher Flavin spoke of how rapidly the climate change issue is developing—“unfolding at lightning speed,” as he put it.

“Unfortunately, many of the developments point to the increased urgency of the problem and the need to act even faster than was thought,” said Flavin.

Global emissions increased 37 percent since 1992 when the first actions were taken international to address climate change. We are moving “dangerously close to the so-called threshold of dangerous interference of the climate system.”

“I was struck by the increasing level of alarm [among] scientists and the really painfully slow process of negotiations among nations,” which have “used arguments they have been using continuously for more than a decade.”

Planet Earth’s Equilibrium Out of Balance

Into a Warming World begins in Chapter 1 with the telling of a new development in the coldest northern regions of the earth: In the past three summers, for a few weeks, water instead of ice appears in a large section of the Arctic enabling ship passage from the Atlantic to the Pacific, which is normally only possible through the Panama Canal or around the Cape of Good Hope.

“Never before in recorded human history has it been possible to make that journey,” writes Flavin with Robert Engelman, who is Worldwatch project co-director for State of the World 2009.

That little picture of change indicating the planet earth heating up is emblematic of the book. It has become urgent that we reduce and soon eliminate greenhouse gas emissions (GHG), while at the same time learn how to adapt to climate change, say these two advocates for climate change action.

Into a Warming World, the 26th in the State of the World series, presents a detailed account of the problem of global warming in a language mostly free of scientific terminology, in the hope that by demystifying the problem, policymakers, NGOs, academics, and interested people will grasp the problem and insist on a change in direction.

Behind the sobering analysis and dire predictions discussed in Into a Warming World, lies the hope at the end of 2009 for the international climate conference in Copenhagen, when decisions will be made to save the climate for future human civilization.

The need urged in the book is mind-bogging—to essentially end the “emission of carbon dioxide by 2050 to avoid catastrophic disruption to the world’s climate.” That objective would almost seem impossible to fulfill. Yet, the book is not depressing as you might expect.

The authors—all 47 of them—are enthused, even optimistic of the opportunities for a new way of life for the earth’s denizens in a myriad number of ways: using renewable energy, efficiency improvements in agriculture and forestry, and facing the rising sea levels and health threats due to warmer climes.

“…the resources, technologies, and human capacity for change are all in place. The missing ingredient is political will, and that is a renewable resource,” say Flavin and Engelman.

Leaders were slow to act when on June 23, 1988, James Hansen, from the National Aeronautics and Space Administration (NASA), first sounded the alarm before a Senate Committee, proclaiming that year’s record temperature was not a random variation, but that a growing concentration of carbon dioxide and other pollutants were the cause.

The U.S., in particular, dragged its feet as the rest of the world moved to take action, first in 1992 with the adoption of the United Nations Framework Convention, culminating in the Kyoto Protocol in 1997, which both the Clinton and Bush administrations refused to enter into.

Resistance to change runs wide and deep. Back at the time of the Kyoto Protocol signing, the U.S. Senate voted 95-0 “to oppose its ratification on the grounds that it would hurt the U.S. economy and leave developing countries, without comparable commitments, at an unfair economic advantage,” writes Engelman.

There were also scientific reasons and excuses to equivocate. By the very nature of climate studies, with their inevitable uncertainties, the skeptics could prolong the acceptance of global warming. But as precious time was lost during the last two decades, the global emissions rose from 1 percent in the 1990s to 3.5 percent a year in 2000-2007. Most of the increase can be attributed to China.

“…the concentration of carbon dioxide in the atmosphere has increased faster during the last 10 years than at any time since continuous measurements began in 1960,” says W. L. Hare, climate scientist at the Potsdam Institute for Climate Impact research in Germany in chapter two.

If we don’t change course in a hurry, it will be too late, warns Hansen again when he spoke last June 23rd, marking the 20th anniversary of his historical warning. Current trends in emissions will raise the Earth’s temperature by 4-6 degrees Celsius (7.2-10.8 degrees Fahrenheit) by the end of the century, while the earth has already warmed over 0.7 degrees Celsius in the last 100 years, says Hare, with much of that increase attributed to human activities.

What would be a “safe” level of warming? The consensus of scientists on this question is converging on 1.3-1.4 degrees Celsius above the pre-industrial level of circa 1750. Above this level, the risks of major ecosystem disruption are major, even the possibility of melt down of the Greenland or West Antarctic ice sheets.

“It is hard to avoid the conclusion that even a warming of 2 degrees Celsius poses unacceptable risks to key natural and human systems,” says Hare. The emissions reductions needed to achieve this are massive, but technically feasible. To be at around the 1 degree Celsius for acceptable global warming, Hare concludes that GHG emissions will have to peak before 2020 and then drop to 85 percent below 1990 levels by 2050, “with further reductions beyond this time.”

To achieve this goal, many strategies are being developed and discussed in the book. One example discussed at length is to change farming and land use (especially halting the deforestation) “to cool the planet.” In Chapter 3, we learn that land use and land use changes account for about “31 percent of total human-induced GHG emissions into the atmosphere,” according to Sara J. Scherr and Sajal Sthapit, from Ecoagriculture. They say that it is now possible for growing plants to “remove huge amounts of carbon from the atmosphere and store it in vegetation and soils…” and is essential action to sustain food and forest production in response to climate change.

One of the methods discussed is switching from inorganic fertilizers, which cause the release of billions of tons of GHG every year, to organic fertilizers. They cite a 23-year experiment by the Rodale Institute which found that by changing over to organic farming of 65 million hectares of corn and soybean, a quarter of a billion tons of carbon dioxide could be sequestered.

Livestock is a big factor in the GHG emissions from agriculture and land use change—50 percent. We learn that one cow on a beef farm is “responsible for more GHG emissions in a year than someone driving 8, 000 miles in a mid-size car.” The authors conclude that reducing meat consumption is almost certainly necessary in the future, as well as agricultural strategies.

China and the U.S. Roles in GHG Emissions

As the fastest growing country, China poses a particular concern on its current and potential GHG emissions, says Yingling Liu, from Worldwatch Institute, in “Climate Connections,” a special section of Into a Warming World. China produces an estimated 24 percent of the global GHG, surpassing the U.S. portion of 21 percent, notes Liu.

Of course, on a per capita basis, China is far below the U.S. in GHG emissions. Despite our culpability in global warming, so far the U.S. has shown resistance to committing to emissions reductions, which is “undoubtedly the greatest single obstacle to international action on the problem,” says Engelman.

Policymakers of nation states will need to decide on a course in the coming months so they are ready to move aggressively when they gather in Copenhagen for the next conference on climate change conventions.

The roughly 200 nations meeting in December will construct a new protocol to replace Kyoto, which is running out in 2012. The book concludes that they will need to be strongly resolved that not even a global financial crisis like the one we experienced last fall, or a war in the Middle East, or world poverty and hunger, or another terrorist attack, will dissuade them from making the management of carbon emissions and threats to planet earth the number one priority, or at a minimum, on equal footing with the other crises.

“Any climate agreement built on an assumption of global prosperity is doomed to failure,” say Flavin and Engelman.