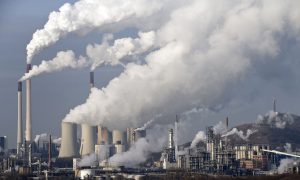 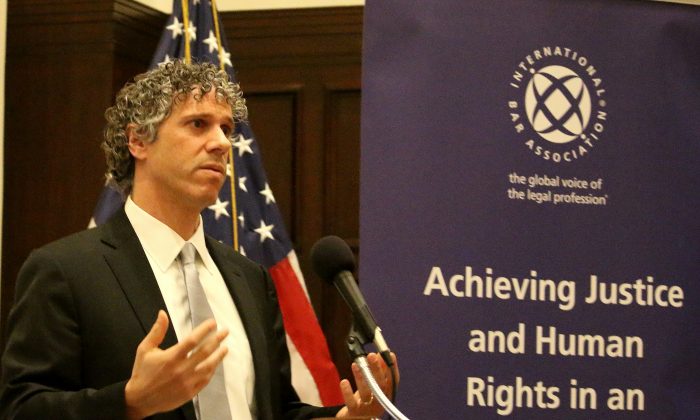 WASHINGTON—”Climate justice” is a new concept that is making inroads globally among policy makers and lawyers. The term itself was probably first introduced by Mary Robinson, United Nations Secretary-General’s special envoy for climate change, in Oct. 2012, in Dublin at the International Bar Association (IBA)’s annual conference.

Her assumption shared by many in the legal profession is that every individual, community, and nation is entitled to live in a safe and healthy environment. Global climate change is unfolding rapidly, and frequently, tragically, before our very eyes.

President Barack Obama addressed the issue in September before the United Nations. “There’s one issue that will define the contours of this century more dramatically than any other, and that is the urgent and growing threat of a changing climate.”

However, climate changes don’t affect us all the same. Droughts, flooding, extreme weather, and storms are impacting some people, communities, and nations more adversely than others. For this reason, policies to mitigate the harmful effects of climate change or adapt to climate changes have justice implications.

For example, the Maldives, consisting of nearly 1200 islands in the Indian Ocean, 200 of which are inhabited, are expected to be inundated by the sea. Sadly, the people of Maldives will likely have to abandon their homeland. The Maldives’ highest natural point on the islands is only 7.5 feet high, which is the lowest of any nation. The average height is only 5 feet. The sea has risen 8 inches in the last century and estimates are that it will rise nearly two feet more by 2100.

Let’s Call It: 30 Years of Above Average Temperatures Means the Climate Has Changed

Questions arise about where a nation of 400,000 will go. Neighboring India, Sri Lanka, or possibly Australia have all been considered, according to The Guardian in an article in 2008. When tragedy strikes here, what will be the legal status of the “climate change refugees?”

Is it fair or just that the cause of the rising sea levels was largely due to other nations not restricting their use of fossil fuels that most climate scientists believe releases greenhouse gas into the atmosphere, and causes global warming? Certainly, the inhabitants of Maldives had little to do with carbon (CO2) increases.

What restitution, if any, can be made for the damage done to us?
— Mohamed Nashheed, former president of Maldives

The former president of the Maldives, Mohamed Nashheed, raised a number of issues relevant to Maldives becoming the first nation to abandon its homeland because of global warming and rising sea levels. He spoke passionately at the annual conference of the IBA in Tokyo in October 2014.

“What restitution, if any, can be made for the damage done to us? … So we look to the international community to provide legal protection where it could not provide environmental protection.”

When tragedy strikes [Maldives], what will be the legal status of the ‘climate change’ refugees?
— excerpt

Her request was granted. An IBA task force was established and after two years it wrote a 240 page report, “Achieving Justice and Human Rights in an Era of Climate Disruption,” released late last year with more than 50 recommendations.

Al Gore, former U.S. vice president, author, and 2007 Noble Peace Prize recipient, praised the report at the Tokyo conference. Speaking via satellite, he provided the reason why it was needed.

“The climate crisis is fundamentally an issue of justice. What we are doing is wrong. The worst consequences of our reckless pollution of the atmosphere, which now exceeds 10 million tons of global warming pollution spewed into the thin shell atmosphere surrounding the planet every day as if it is an open sewer—the burden of this are largely borne by those who did not create the problem, and whose voices do not yet have the power to effect real and lasting change.”

The climate crisis is fundamentally an issue of justice. What we are doing is wrong.
— Al Gore, former vice president of the United States and 2007 Noble Peace prize recipient

Gore continued, “Access to a safer, clean, healthy, and sustainable environment is the universal right.” In addition, he said that without immediate action to solve the climate crisis, “injustices will become more intense and more common. Our continued reliance on dirty fossil fuels is clearly unsustainable and unjust.”

Robinson said that the current system of international law is deficient in addressing climate change. She said that research by the foundation, which she heads, found that only 12 countries made the connection between human rights and climate change in reports to the United Nations Framework Convention on Climate Change (UNFCCC) and the Human Rights Council. At the IBA conference in Dublin she said:

“The legal profession has a critical role to play in strengthening and creating laws…and policies needed to ensure an effective and equitable response to climate change. We cannot solve the climate crisis without you, the lawyers of the world.”

David Rivkin, who recently began a two-year term as president of the IBA, said the IBA task force report was one of the first efforts to achieve a legal framework that examines climate change and human rights in a comprehensive manner. He spoke on a panel with several experts in law and human rights on March 4 at the National Press Club.

Rivkin was eager to enlist anyone he could to get the recommendations in the report turned into action. He said, “Ultimately, the significance of the IBA effort, and events like this, will be measured whether people, including those in this room, explain to those in power to deliver justice to those affected by climate destruction, especially among those of the most vulnerable among us.”

The report concluded that international law was not yet developed to the extent that it can provide a legal basis for limiting the degree to which states may release harmful greenhouse gas into the atmosphere.

We cannot solve the climate crisis without you, the lawyers of the world.
— Mary Robinson, United Nations Secretary-General's special envoy for climate change

The United States has a head start on the issue. President Bill Clinton signed an executive order 20 years ago that called upon each U.S. agency to operate with environmental justice as part of the mission, according to Avi Garbow, who spoke at the National Press Club event.

Garbow serves as the general counsel for the Environmental Protection Agency, where he oversees over 200 lawyers in the EPA. Lawyers, he said, are essential in many instances for the people to receive the benefits of environmental laws.

Garbow said that the consequences of climate change are being felt today. He gave many examples where the environmental laws and federal regulations have a direct role to play.

The coastal communities have been damaged by the intense weather from storms, costing lives and billions of dollars. Droughts and weather patterns affect the agriculture sector.

Garbow mentioned a Native American village of 400 off of the northwest coast of Alaska, which is in danger of being swept away by the ocean. The Inupiat tribe inhabit Kivalina, which is about 80 miles north of the Arctic Circle. The sea ice that protected the village is melting. The village should be moved, said Secretary of Interior Sally Jewell, who visited the island last month. It will cost $100 million, but the Obama administration has proposed only half that amount.

The state of the law on climate change justice in this matter, like many other tragedies, is evidently still in its early stages.