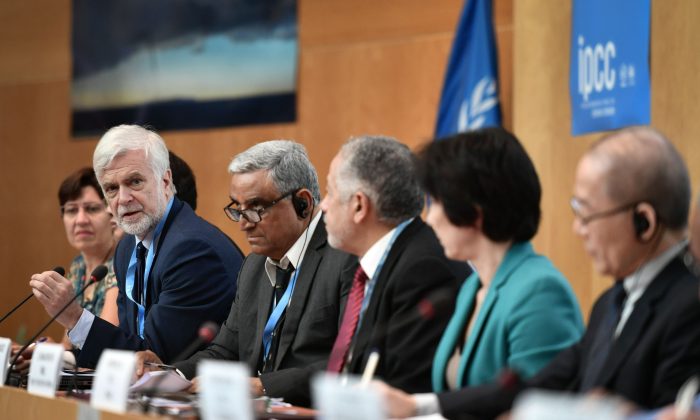 Intergovernmental Panel on Climate Change (IPCC) working group III co-chair Jim Skea (2nd L) answers a question during a press conference on a special IPCC report on climate change and land on August 8, 2019 in Geneva. - Humanity faces increasingly painful trade-offs between food security and rising temperatures within decades unless it curbs emissions and stops unsustainable farming and deforestation, a landmark climate assessment said the IPCC. Negotiators from 195 countries on August 8, 2019 finalised the most comprehensive scientific assessment yet of how the land we live off affects climate change, after marathon talks in Geneva. (Photo by FABRICE COFFRINI / AFP) (Photo credit should read FABRICE COFFRINI/AFP/Getty Images)
Viewpoints

A recent report from the U.N. Intergovernmental Panel on Climate Change (IPCC), a draft of which was leaked before publication, states that there needs to be a transformation in food production and land management if we’re to keep global temperatures at “safe” levels.

The report goes on to explain that humans exploit 72 percent of the planet’s ice-free surface to maintain the Earth’s population, and that agriculture, forestry, and other land use produces almost a quarter of greenhouse gas emissions. They predict disastrous results for the entire planet if their measures aren’t adopted.

It’s important to understand what all of this means and implies. A small group of unelected U.N. officials, each of whom has individual political perspectives and goals, are attempting to set a world policy that would completely transform how land is used and how people live and eat.

The list of problems with this concept is long, but it always eventually boils down to that only the United States will be expected to abide by the draconian recommendations, whenever they are finally trotted out.

However, before breaking this down further, let’s take a step back first and look at the general concept of global warming. The theory is that certain specific “greenhouse” gases, which all already naturally exist in the atmosphere in very small amounts, are augmented by human activity. According to the theory, the very slight increase in greenhouse gases introduced by mankind then subsequently causes the Earth’s temperature to go up.

A few facts not publicized in this debate: 99 percent of the Earth’s atmosphere is composed of nitrogen and oxygen; argon makes up about 93 percent of the remaining 1 percent of the Earth’s atmosphere. The remaining .07 of a percent is more than half carbon dioxide, the rest being composed of neon, helium, and krypton, which aren’t designated as greenhouse gases, and methane, nitrous oxide, ozone, chlorofluorocarbons, and hydrofluorocarbons, which are designated as greenhouse gases.+

There’s also a wildcard in the mix, which is water vapor (designated as a greenhouse gas), which tends to vary based on a number of factors and can represent about 1 percent of the atmosphere at sea level.

Everyone freely admits that the amounts of greenhouse gases released by mankind into the mix are much smaller than what already exists naturally, so we’re probably talking about less than 0.0001 of a percent of the atmosphere theorized as being the cause of the destruction of the Earth’s climate. Considering that Earth’s atmosphere naturally varies by much larger amounts than anything done by mankind, it makes the theory of global warming look pretty lame.

There are other major factors in determining the Earth’s temperature, such as ocean currents and tectonic plate shifts. The ever-shifting gases in the atmosphere, the heat from the sun, and the other major factors are so large, and anything done by man is so tiny as to be unmeasurable as a separate factor.

This is why there are no mathematical models that can even approximate how changes in the atmosphere, the sun, the currents, and so on affect each other and predict the resulting changes to the environment. The math is just too complex because the measurements are too difficult and vary from moment to moment, and no one knows how they affect each other.

The real name for this process of changing the environment is terraforming, and it’s an old theory that no one has yet figured out. There are models out there that show what happens if the temperature does go up or down, but not how to make it go up or down—a big difference. When temperatures go up or down, no one knows how to separate out any man-made activities from the natural changes.

All of this complicated mess is hard to discuss purely on the facts, because, let’s face it, the facts are kind of boring. Atmospheric percentages and so on don’t catch the attention of voters or donors. But as a propaganda issue, when facts don’t matter, it’s a thing of beauty, and perfect for the Democratic presidential hopefuls who discuss it often.

It’s an absolutely perfect propaganda issue because of its strong ability to stir emotional values that can be manipulated, and it’s coldly exploited on a daily basis—better than any intelligence influence operation could ever be. Being told you can save the Earth and that the Earth will die without your help, even without any proof or evidence, is perfect for a campaign issue, highly appealing to both voters and donors.

There’s another fabulous positive from this calculated propaganda campaign: control. Revisiting the IPCC, their recommendations focus on cattle and agriculture including, in particular, rice fields. The solutions they discuss are in large part returning agricultural land to its original state by reducing demand for large-scale food production through a change in the worldwide diet and living conditions. The new diet proposed is mostly vegetarian and vegan based on coarse grains, vegetables, nuts, and seeds.

Though not explicitly stated, by my reading, the new sustainable farms will likely be smaller and will have to surround population centers. So left unstated is the fact that the people will all have to be forcibly moved to population centers in order for this plan to work.

Imagine the power in your hands to tell people where they must live and what they are allowed to eat. God forbid.