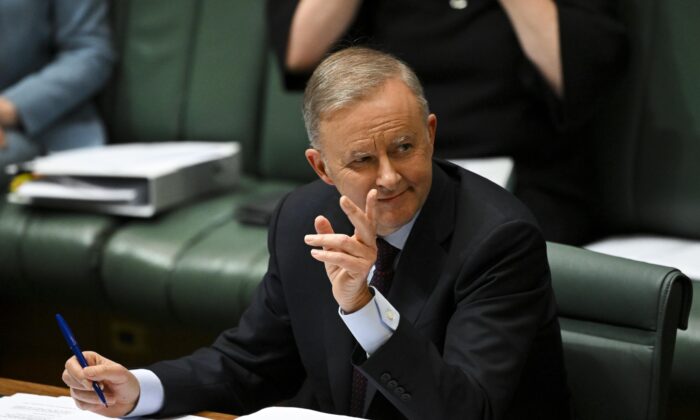 The Australian federal government has passed its climate bill, legislating a 43 percent emissions reduction target, through the lower house.

It was passed 89 votes to 55 with the support of Greens, teal independents, and Tasmanian Liberal MP Bridget Archer after a number of minor amendments.

The legislation sets a target of 43 percent carbon emissions reduction on 2005 levels by 2030 and net-zero emissions by 2050.

“This is a fulfilment of a core promise that we made at the election,” Prime Minister Anthony Albanese told reporters on Aug. 4. “And it is pleasing that even though the crossbenchers did not get the demands met that were not consistent with the program that we put to the election, that it passed the parliament.”

“Teal” Independent MP Zali Steggall said the next step would be phasing out oil, coal, and gas.

An amendment to cease all new oil, coal, and gas projects, proposed by Greens Party Leader Adam Bandt, had been rejected.

It also voted against the amendment to further lift the emissions reduction target to 75 percent by 2030 and net-zero by 2035, proposed by the Greens and teal independent MP Andrew Wilkie.

The prime minister noted that all Coalition members aside from Archer opposed the Bill, and implored Coalition Senators to “change their mind” when the Bill is presented in the upper house.

Meanwhile, Coalition Leader Peter Dutton has opened the door for the Liberal-National Coalition to put nuclear energy on the table as a policy going forward.

He said renewable energy sources had a role in Australia’s energy mix, it needed to be balanced with investment in dispatchable energy generators.

Based on current trends around 60 percent of Australia’s coal-fired generators would be closed by 2030, which could leave households and businesses vulnerable to blackouts, Dutton said.

“The current energy crisis has shown the importance of getting more dispatchable power into the grid,” he said in a statement.

Bowen said the opposition, in giving the go ahead for nuclear, was supporting “most expensive form of energy.”

“We have a cost of living crisis, energy prices going through the roof, and what’s [the opposition’s] big bright idea? Let’s have the most expensive form of energy we can possibly think of,” he said.