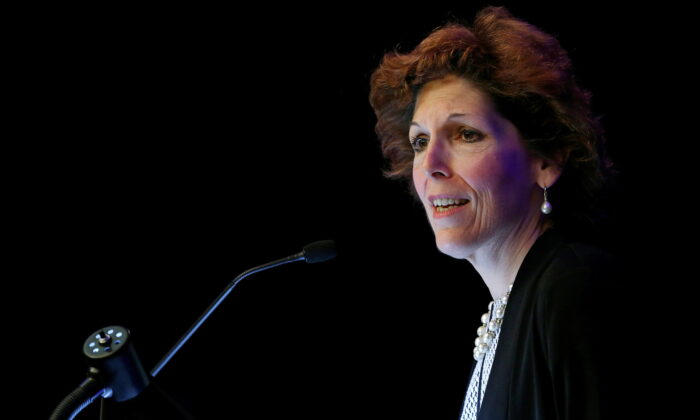 Cleveland Federal Reserve Bank President Loretta Mester on Tuesday said she would like to raise interest rates to about 2.5 percent by year end, with bigger rate hikes in the first half, and further tightening next year to bring down high inflation and keep it from getting entrenched.

“I find it appealing to front-load some of the needed increases earlier rather than later in the process because it puts policy in a better position to adjust if the economy evolves differently than expected,” Mester said in remarks prepared for delivery at John Carroll University. “If by the middle of the year, inflation is not beginning to moderate, we could speed up our rate increases. But if inflation is moving down faster than expected, we could slow the pace of rate increases in the second half of the year compared to the first half.”

The Fed raised rates last week by a quarter of a percentage point, to a target range of 0.25 percent to 0.5 percent, a move Mester said she strongly supported. Her remarks added to a rising chorus supporting a faster pace at coming Fed meetings.

Fed Chair Jerome Powell on Monday said the Fed should raise rates “expeditiously” toward neutral and, if needed, above it.

Russia’s invasion of Ukraine adds to upward pressure on inflation, Mester said, which is already running at a 40-year high and three times the Fed’s 2 percent inflation target. “With inflation already at very high levels and demand outstripping supply, there are rising risks that too-high inflation will become embedded in the economy and persist,” she said.