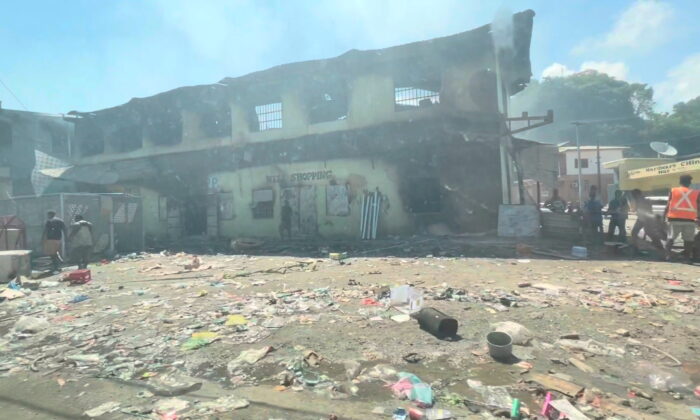 MELBOURNE—Soldiers and police from Australia and Papua New Guinea were helping to restore calm in the Solomon Islands as clean-up operations started, after several days of rioting left three dead and led to dozens of arrests, local media reported.

The Solomon Star newspaper said Australian soldiers and police and troops from Papua New Guinea had helped to restore normalcy in the country’s capital Honiara, halting the looting, rioting, and burning of buildings and shops, amid protests calling for the prime minister’s resignation.

Overnight, clean up operations began in earnest in areas that were particularly hard hit, including the Chinatown district of the capital, Honiara, the newspaper said. Footage obtained by Reuters showed heavy machinery moving rubble from burned out shops.

Three charred bodies were discovered in a store on Friday in the Chinatown district, an area targeted by protesters still resentful the government in 2019 ended diplomatic ties with Taiwan to establish formal links with China.

“Although things are very unstable at this point … plans, we know, are being made, to ensure there can be calm,” he said.

Some 50 officers from the Royal Papua New Guinea Constabulary arrived in Honiara on Friday, a day after Australia sent its own forces to the capital, both in response to requests from the Solomon Islands government for help.