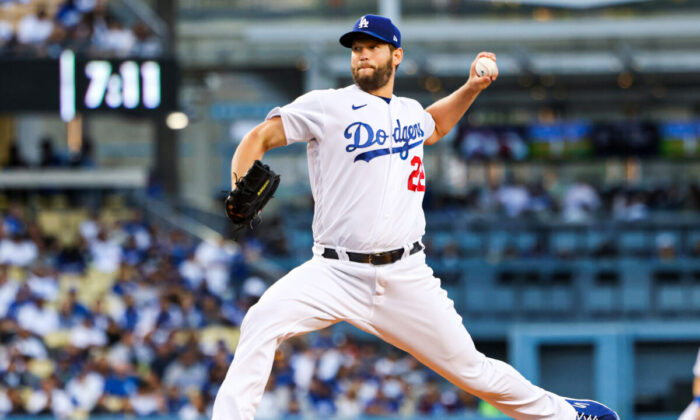 Clayton Kershaw #22 of the Los Angeles Dodgers pitches during the first inning against the Detroit Tigers at Dodger Stadium, in Los Angeles, on April 30, 2022. (Katelyn Mulcahy/Getty Images)
Baseball

Kershaw pitched six innings striking out, while giving up one run on four hits and two walks. Kershaw was relieved with the game tied at 1, but the Dodgers would eventually lose to the Detroit Tigers 5–1.

Beginning their careers with the Brooklyn Dodgers, Don Drysdale is third on the Dodgers’ career strikeout list with 2,486 and Sandy Koufax is fourth at 2,396.

“It’s special,” said the three-time Cy Young winner Kershaw. “I understand that the Dodgers are a historic franchise, so the guys that are on that list that I was fortunate enough to pass was a big deal.”

Kershaw entered the game needing three strikeouts to tie Don Sutton’s Dodgers’ record of 2,696, and did so in the third inning by striking out Dustin Garneau.

Kershaw then set surpassed the record in the following inning striking out rookie Spencer Torkelson with a slider before finishing the inning with two more strikeouts of Schoop and Garneau.

Kershaw has spent his entire 15-year career with the Dodgers. In March of this year, signed a one-year deal worth $17 million to continue with L.A, and potentially end his famed tenure having played only for the Dodgers.

“It speaks to longevity and consistency. It’s just going to add to his lore, not only in Dodger but baseball history,” said Dodgers manager Dave Roberts before the game. “I think that for a fan base that’s followed him his entire career, to ultimately reach this milestone at home, get that ovation and share that with the fans certainly makes it sweeter.”

The Dodger faithful of 52,613 erupted in celebration following Kershaw’s record-breaking 2,697 strikeouts. Kershaw took a long walk around the mound and tipped his cap in appreciation.

“It was so cool to see [the fans’ reaction],” added the 33-year-old Kershaw. “I tried to brush it off and keep going, but they wouldn’t let me. It definitely meant a lot.”

Kershaw’s wife, Ellen, and their four children were in attendance. Cameras showed Ellen holding the youngest child as the family were jumping in celebration.

The Kershaws co-authored a book released in 2012, “Arise: Live Out Your Faith and Dreams on Whatever Field You Find Yourself,” detailing their Christian faith and humanitarian efforts.

In the prior off-season of 2011, the Dallas natives Kershaws visited Zambia as part of a Christian mission organized by Dallas-based Arise Africa.

They would meet an 11-year-old HIV-positive, Hope, and announce their dream of building an orphanage in Lusaka, to be named “Hope’s Home.”

Kershaw would then donate the $260,000 that was awarded from winning the 2011 Players Choice Award, following a pledge that grew to over $100,000 from their Kershaw’s Challenge organization.

To further raise awareness, Kershaw announced the project “Strike Out To Serve” with additional donations of $100 for each strikeout in the 2011 season, ending with a career-high 248.

The Kershaws continued to support the children of Zambia in 2014, through a partnership with CURE International. They were able to raise funds for 170 surgeries for children, along with providing new medical equipment for CURE hospital in Lusaka.

In 2015, Kershaw continued his partnership with CURE International with the goal of funding 100 surgeries for CURE’s hospital in the Dominican Republic.

The Kershaws also are locally involved with other programs, including Habitat for Humanity and the Peacock Foundation, which provides animal-assisted interventions and activities for at-risk youth.

Since 2013, the Kershaws have also hosted “Ping Pong 4 Purpose,” which is a charity ping-pong tournament at Dodger Stadium, raising funds for Kershaw’s Challenge by including current and past Dodgers, celebrities, and team sponsors.

The Dodgers have dominated the NL West for nearly the past decade; they currently dropped to second in the NL West with a record of 13–7.

Nearing the twilight of his career, Kershaw’s finally fulfilled his greatest goal of winning the World Series in 2020. He and high school friend, Matt Stafford, shared similar paths succeeding to persevere long careers to eventually win their coveted championship.