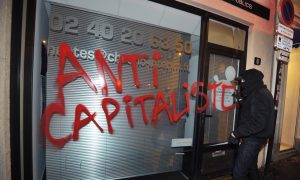 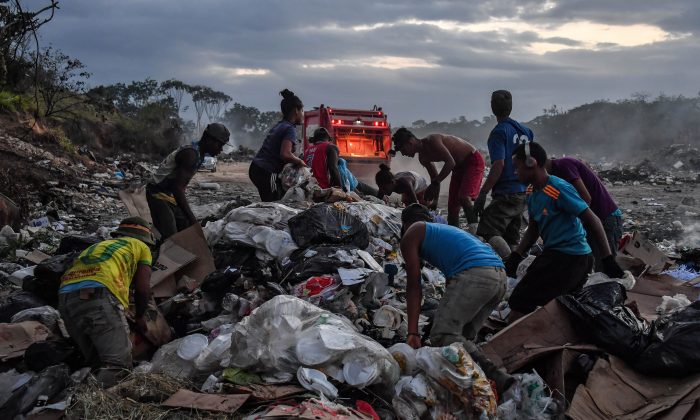 Venezuelan scavengers dig through trash at a landfill, in Pacaraima, Roraima State, Brazil, on the border with Venezuela, on February 28, 2019. (Nelson AlmeidaNELSON ALMEIDA/AFP/Getty Images
Viewpoints

At its core, communism inverts society in two ways: The first—by distorting elements of truth. The second—by outright lies that reverse morality.

Once we understand that, it’s easy to see why communist ideology always ends up siding with criminals, miscreants, psychotic personalities, professional victims, and others that mask their true intentions behind deceit. Sometimes, it’s because they revel in the suffering of others, and sometimes, it’s because if they can’t have it, no one can.

This inversion can only be understood by establishing how people are convinced into following the communist piper into oblivion, over and over again.

A con man never reveals his true intentions. Even if you catch him after the fact, he’ll usually admit no wrongdoing. It’s no surprise, then, that communists are notorious for leaving disaster in their wake, claiming no responsibility for what they’ve done. Though there have been well over 100 million victims of communist democide through starvation and cold-hearted brutality, it does nothing to stop communists from blaming capitalists, class enemies, counter-revolutionaries, fascists—anyone but themselves.

The reason they get away with this is because people sympathetic to communist ideology despise personal responsibility. They want the world to be an idealistic paradise where they don’t have to face the consequences of their actions—a utopia driven by a total disregard for causality. Those pulling the strings, however, aren’t so idealistic. Nay, it’s their cynicism that makes them feel it’s acceptable to manipulate others, because if they don’t, others will.

Kernels of truth are entwined with such pessimism, perpetuated by a self-fulfilling prophecy. Rather than aspiring to be better, communist sympathizers surround themselves with others who wallow in their misery, and as the saying goes, misery loves company.

Like crabs in a bucket, whenever one of them almost reaches the top, the others drag it back down. This is also described as tall poppy syndrome, a concept that originates with Herodotus’s account of Thrasybulus cutting off the tallest ears of wheat until he destroyed the best part of the crop.

Communism eliminates talent and ability in precisely the same manner, to which society quickly eats itself in a cacophony of envy. Ability is replaced with jealousy of success that makes everyone equally miserable, creating low-trust societies notorious for political repression aided by citizens reporting on one another, much like the growing culture of political correctness around us.

This demonstrates why envy was considered one of the seven deadly sins by the medieval Catholic Church. Today, these sins—lust, gluttony, greed, sloth, wrath, envy, and pride—are treated as badges of honor within a hierarchy of leftist victimhood called the “progressive stack.”

According to communist ideology, suffering can only possibly be explained by the struggle against the “haves” by the “have nots,” in what’s known as class conflict. This is, however, a distortion of truth, as I initially described. People do suffer, and this can involve the actions of others, but what makes all the difference is how we interpret this suffering. Do we use this an excuse to “do what thou wilt,” as occultist Aleister Crowley once said, or do we turn this into a life lesson that makes us wiser and stronger?

Furthermore, there is no end to suffering in an imperfect world, and as Christ said, “You will always have the poor with you.” The inability for communists to accept such imperfection is rooted in the Marxist theory of dialectical materialism. Hence, there is no comfort beyond the physical.

Being an atheist ideology, this explains why communism creates such unrealistic expectations about what can be achieved in an imperfect world. While theism can bring internal peace and harmony, communists will never be satisfied until they’ve created heaven on earth.

Without the ability to temper expectations with reality, the more communists fail, the more they invert morality and truth with rebellion. Communists talk of class consciousness, where the masses become aware of their servitude, rising up against their masters. Conversely, false consciousness brainwashes the masses into embracing their slavery, instead of fighting for their liberty.

Truth tells a different story, however. There will always be tyrants, just as there will always be poverty. No amount of promises of security from con men can change that. We must be conscious of the fact that freedom is a delicate butterfly that can easily be crushed if we hold it too tightly.

Benjamin Franklin summed this up well when he said, “They who can give up essential liberty to obtain a little temporary safety deserve neither liberty nor safety.”

Communists may delude themselves into believing their intentions are noble, but their fruits tell a different story. People are stripped of their earnings because property is considered theft, when taking property by force is the true theft. Criminals are told that the only reason they’re prosecuted by the law is because they’re victims of society, when the targets of their illegal actions are the true victims.

Modern cultural Marxism, while differing slightly from the classical economic variety, takes this inversion so far as the “fat-acceptance movement,” where obesity should be celebrated, in an endless sea of identity politics that inverts every virtue and vice imaginable.

As all conventional morality is inverted in our modern society, we must ask ourselves where this will end. Do we continue down this road until only law-abiding, morally upstanding people are turned into pariahs and enemies of society?

Communism is the result of a society that fails to realize that the material must be tempered with something greater than what we see and touch. Until we return to a culture that respects this, the moral inversion will never end.