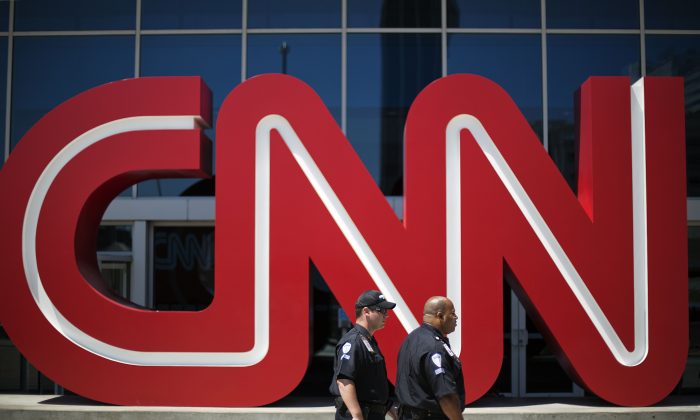 Security guards walk past the entrance to CNN headquarters in Atlanta. (David Goldman/AP Photo)
US

Current and former black employees at CNN are suing the network, Turner Broadcasting, and Time Warner, claiming they were discriminated against.

The plaintiffs were identified as Celeslie Henley and Ernest Colbert Jr. Henley. The press release also showed a picture of DeWayne Walker, a CNN producer who sued CNN in a separate case in January for $50 million for racial discrimination and retaliation for an Equal Employment Opportunity Commission complaint he filed.

“As a result of the current discrimination lawsuit filed on behalf of DeWayne Walker vs. CNN, Time Warner & Turner, we have uncovered stories involving abuse of power, nepotism, revenge, retaliation and discrimination,” said Daniel Meachum in a press release. Henley is a former administrative assistant at CNN, and Colbert is still employed at Turner as a senior manager at TBS.

Walker, meanwhile, is an integrated marketing manager at CNN, AJC.com reported. Walker claimed that CNN didn’t promote him for 13 years because he’s black and alleged that white employees were promoted over him, at his expense.

“The current workplace culture utilizes practices that discourages or prohibit minorities from exercising their rights under employment discrimination statutes,” they allege in the lawsuit, which was filed on Wednesday, The Hill reported.

“This discrimination represents a company-wide pattern and practice,” the lawsuit added, according to AJC, “rather than a series of isolated incidents.” Meachum said that after Walker filed his suit months ago, “we have uncovered stories involving abuse of power, nepotism, revenge, retaliation, and discrimination,” Variety reported.

The new, 40-page lawsuit also touches on data released by Turner, and according to the suit, “salaries paid by Turner and/or CNN to African-American compared with salaries paid to Caucasian employees reveals dramatic differences in pay in similarly situated employees of different race. Upon information and belief, the pattern exists throughout the company,” The Hill reported.

CNN Apologizes for Producer Who Joked About Trump’s Plane Crashing

“Salaries paid by Turner and/or CNN to African­ Americans compared with salaries paid to Caucasian employees reveals dramatic differences in pay in similarly situated employees of different race,” it added.

It was filed in a federal court in Atlanta on Dec. 6.