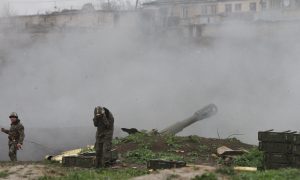 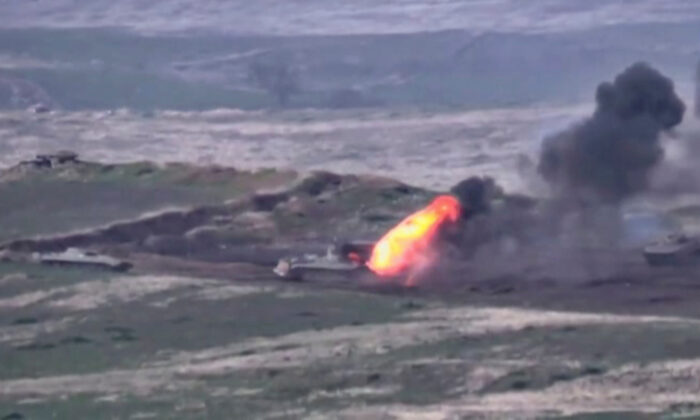 Azerbaijani armored vehicles, one of which is destroyed by Armenian armed forces in the breakaway region of Nagorno-Karabakh, are shown in this still image from footage released by the Armenian Defense Ministry on Sept. 27, 2020. (Defense Ministry of Armenia/Handout via Reuters)
Europe

YEREVAN/BAKU—Armenia declared martial law and mobilized its male population on Sept. 27 after clashes with Azerbaijan over the breakaway Nagorno-Karabakh region, in which sources on both sides reported fatalities.

Authorities in Nagorno-Karabakh, a mainly ethnic Armenian region inside Azerbaijan that declared independence in 1991, also announced martial law and mobilized its male population after clashes which the two sides blamed on each other.

Armenia said Azerbaijan had carried out an air and artillery attack on Nagorno-Karabakh, but Azerbaijan said it had responded to Armenian shelling.

Armenian human rights activists said two civilians, a woman and a child, were killed by Azeri shelling. Baku said an unspecified number of Azeri civilians had been killed and six wounded, and Nagorno-Karabakh said 10 of its military staff had been killed. The reports couldn’t be independently confirmed.

The two countries have long been at odds over Nagorno-Karabakh, which broke away from Azerbaijan in a conflict that broke out as the Soviet Union collapsed.

Though a ceasefire was agreed to in 1994, Azerbaijan and Armenia frequently accuse each other of attacks around the region and along the separate Azeri-Armenian frontier.

The conflict has worried Western and regional countries in part because it could cause instability in the South Caucasus, which serves as a corridor for pipelines transporting oil and gas to world markets.

Armenia’s defense ministry said its troops destroyed three tanks and shot down two helicopters and three unmanned aerial vehicles in response to an attack on civilian targets including in Nagorno-Karabakh’s capital, Stepanakert.

“Our response will be proportionate, and the military-political leadership of Azerbaijan bears full responsibility for the situation,” the ministry said in a statement echoed by the foreign ministry.

Armenian Prime Minister Nikol Pashinyan wrote on Twitter: “We stay strong next to our army to protect our motherland from Azeri invasion.”

Azerbaijan denied the Armenian defense ministry statement, saying it had “complete advantage over the enemy on the front,” and accused Armenian forces of launching “deliberate and targeted” attacks along the front line.

“We defend our territory, our cause is right!” Azerbaijan’s president, Ilham Aliyev, said in an address to the nation.

Azerbaijan’s defense ministry said some civilians had been killed but gave no death toll.

At least 200 people were killed in a flare-up between Armenia and Azerbaijan in April 2016. There are frequent skirmishes, and at least 16 were reported killed in clashes in July.