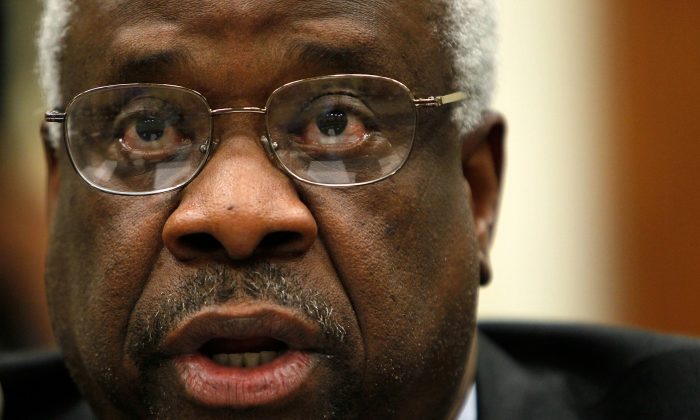 He drew the comparisons in an opinion published Monday, June 24, as the Supreme Court made a landmark decision in an affirmative action case.

The University of Texas rejected the application of Abigail Fisher, a Caucasian Texan. She argued that the university’s admission policies are discriminatory; race is one factor taken into consideration, in an aim to promote diversity as a boon to education. The Court ruled that the lower appeals court failed to apply sufficiently scrutiny in its ruling, and that the appeals court must review Fisher’s case.

But Monday’s ruling did not challenge the foundations of affirmative action established by a 2003 precedent, Grutter v. Bollinger, which upheld the University of Michigan Law School’s consideration of race in its affirmative action policy.

Yet Thomas struck at the heart of affirmative action: “The Constitution does not pander to faddish theories about whether race mixing is in the public interest. The Equal Protection Clause strips States of all authority to use race as a factor in providing education.”

“The argument that educational benefits justify racial discrimination was advanced in support of racial segregation in the 1950s, but emphatically rejected by this Court,” he wrote.

He listed a few benefits touted both by affirmative action defenders and by segregationists: the promotion of peace or tolerance among races, the creation of better leaders, and the benefits to schools.

Affirmative action supporters say diversity in the classroom can promote racial tolerance. Segregationists once argued that more friction between races would occur without segregation. Thomas said the Supreme Court rejected this latter argument in favor of segregation, and “It is, thus, entirely irrelevant whether the University’s racial discrimination increases or decreases tolerance.”

The University of Texas holds that affirmative action prepares students to be leaders in a diverse society. Segregationists once argued that African American students could only develop leadership skills in a separate school, as they would inevitably play second fiddle to Caucasian students in integrated schools.

“It is irrelevant under the Fourteenth Amendment whether segregated or mixed schools produce better leaders,” Thomas wrote.

Thomas likewise dismissed the educational benefits of student body diversity. He noted that segregationists argued Caucasian students would leave the public school system for segregated private schools, draining the resources and support needed to run the public schools. This did, in fact, happen to some degree.

He quoted Losing the Race: Self-Sabotage in Black America by Berkeley linguistics professor John McWhorter: “I was never able to be as proud of getting into Stanford as my classmates could be. . . . [H]ow much of an achievement can I truly say it was to have been a good enough black person to be admitted … ?”

Justice Anthony Kennedy stated in his opinion that scrutiny is important in affirmative action. The race consideration must not deteriorate into a fulfillment of quotas, he said, but must be evaluated alongside multiple and complex factors in the assessment of an individual. Scrutiny must be applied to ensure the consideration of race is, as it was intended in the Grutter ruling, used to fulfill the university’s educational mission and goals.

The University of Texas also maintains ethnic diversity by admitting students in the top 10 percent academically from all schools within Texas.

Justice Ruth Bader Ginsberg was the only Justice to dissent, saying the Fisher case does not require review. Ginsberg supports the university’s affirmative action policies, saying she prefers such covert policies to unofficial practices of considering race.

She said the implementation of affirmative action “followed a yearlong review through which the University reached the reasonable, good-faith judgment that supposedly race-neutral initiatives were insufficient to achieve, in appropriate measure, the educational benefits of student body diversity.”