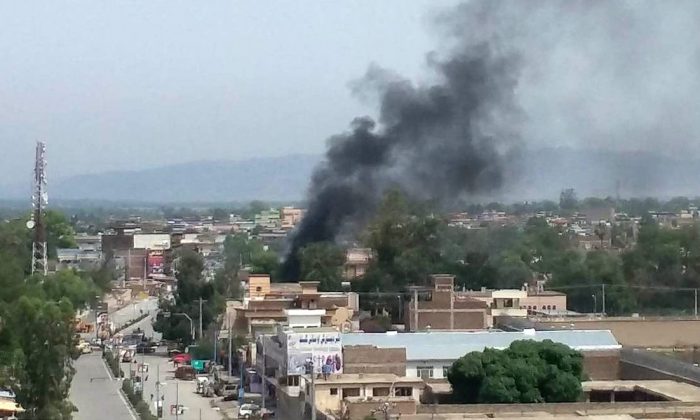 Smoke rises from the site of a blast and gun battle between Afghan security forces and a handful of terrorists in Jalalabad city, Afghanistan May 13, 2018. (Reuters/Parwiz)
Middle East

JALALABAD, Afghanistan–Afghan security forces battled a group of attackers who stormed a government building in the eastern city of Jalalabad on Sunday in a coordinated attack that killed at least nine people and wounded dozens, local officials said.

At least three explosions were heard at the start of the attack on the building housing the state accounts office, the first from a car bomb detonated at the entrance, said Attahullah Khogyani, a spokesman for the provincial governor.

At least nine people, including a child, had been killed and 36 wounded, public health officials said.

The attack, in a busy area of the city with many other official buildings nearby, is the latest in a series that have killed and wounded hundreds in Afghanistan this year and put heavy pressure on the Western-backed government of President Ashraf Ghani.

Most have been in the capital Kabul, but in January gunmen attacked an office of aid group Save the Children in Jalalabad, killing at least five people and wounding 25 in an attack claimed by ISIS that followed much the same pattern as Sunday’s incident.

As the battle continued, smoke could be seen rising from the accounts office building. Witnesses said the explosions had caused carnage among passers-by.

“I saw two rickshaw drivers on the ground with their arms blown off,” said Khan Mohammad, a local resident who saw the initial blasts and the start of the gunbattle.

Gunmen rushed the building following the first blast at the entrance, a member of the provincial council told Reuters. More explosions were then heard coming from inside the building, he added.

He said at least four attackers, armed with rocket propelled grenades and machine guns, still appeared to be fighting police.

Violence has escalated across Afghanistan since the announcement of the Taliban’s annual spring offensive last month and there have been heightened security fears around preparations for elections in October.

Dozens of people have been killed in voter registration centres in recent weeks, leading to fears that people could stay away from the elections, seen as a major test of the government’s credibility.

At the same time, Taliban fighters have stepped up the pressure on government forces across the country, from Baghlan province in the north, where they seized a district centre last week, to Farah in the southwest or Ghazni, south of Kabul.

Last year, the United States increased its support to struggling Afghan forces, announcing plans for thousands of additional advisers and more air strikes in a bid to force the Taliban to enter peace negotiations.

By Ahmad Sultan and Qadir Sediqi