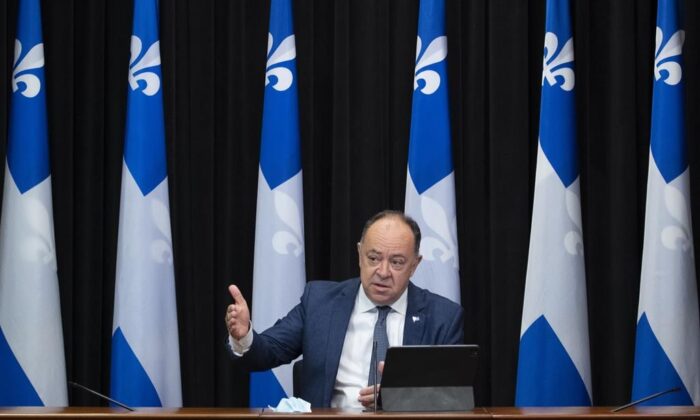 Montreal-based civil rights lawyer Julius Grey said Friday he will ask a judge next week to suspend Quebec’s system for determining how many family doctors can practise in a specific region of the province.

Earlier this week, Health Minister Christian Dubé reduced the number of new family doctors allowed to practise in Montreal and increased the number who can work in nearby suburbs, leading to calls of political interference from the Opposition.

Grey told reporters he will seek an interlocutory injunction to have the permit system—including Dubé’s changes—immediately suspended by a court, before his case goes to trial. The permit system, called plans régionaux d’effectifs médicaux, also known as PREM, is unconstitutional, he added.

“I hope, certainly, that they will set aside these administrative changes and that they will declare the system … inoperative,” he said. “I don’t think you can give (the government) much time because it’s so urgent.”

Grey said the system Quebec uses to distribute doctors around the province is arbitrary and unjust and the lack of access to a family doctor in certain regions of the province violates the right to security of person. It also has a negative impact on mobility rights, he added.

Dr. Mark Roper, a Montreal family doctor and the director of the primary care division at the McGill University Health Centre’s department of family medicine, said nearly 650,000 people in the city don’t have a family doctor, more than in any other region of the province.

He said the government’s permit system underestimates the number of family doctors needed in Montreal and puts people’s health at risk. It’s also pushing doctors out of the province and preventing those who leave from coming back, Roper said.

“We should become a net importer of family doctors and we used to be, but since the PREM process, we have been a net exporter of doctors,” he lamented. “In fact, the number of PREMs available has always been five percent less than our graduating cohort.”

The Opposition Liberals have described Dubé’s decision as political interference, which they said routed doctors from areas represented by the Liberals to better-served parts of the province represented by the governing Coalition Avenir Québec party.

Asked on Friday if his decision was political, Dubé told reporters, “I’ll say one thing: if taking care of people in 450 is political, this is a political decision,” referencing the area code for the regions surrounding Montreal.

“I’ll be very clear: we need to treat every Quebecer the same way, and when I have statistics that prove there are less doctors in those regions and they should be treated as fairly as any other citizen in Montreal or elsewhere, I’ll make those decisions,” he said.