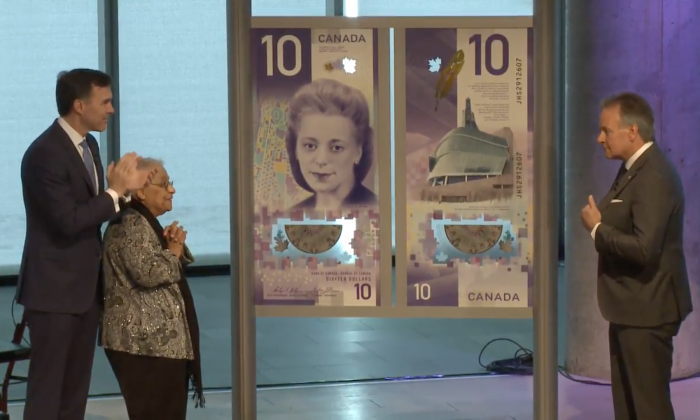 Finance Minister Bill Morneau and Bank of Canada Governor Stephen Poloz spoke during an unveiling ceremony for the $10 note. But the star of the ceremony was Wanda Robson.

Robson, Desmond’s younger sister, was greeted with loud cheers at the start of the ceremony. She delighted the crowd with stories of her big sister’s courage.

“Our family will go down in history.”

“It’s a big day for Halifax, a big and important day for Canada,” said Morneau.

Desmond’s story is a powerful one.

On Nov. 8, 1946, Desmond refused to leave the whites-only section of a Nova Scotia movie theatre. This took place nearly a decade before Rosa Parks refused to give up her seat on a segregated bus in Alabama in the United States. The incident, in which Desmond was eventually dragged out of Roseland Theatre, fined, and thrown in jail by police, sparked a key moment in Canada’s civil rights movement.

The deck was doubly stacked against Desmond because of her gender and the colour of her skin, said Morneau, adding that she paved the way for a broader understanding of human rights across Canada.

Desmond, who died in 1965, was an entrepreneur who sold her own line of cosmetics.

“Viola was tireless as she chased her dreams,” Morneau said.

The new $10 banknote is vertical. On its back is the Canadian Museum of Human Rights, located in Winnipeg. The note will be printed on polymer, which was introduced to Canadian banknotes in 2011.

“I’m immensely proud of all the innovation that went into this note—from the public consultation process that encouraged a national conversation on the important contributions of women in Canadian history, to the note’s beautiful vertical design, to its cutting-edge security features,” said Poloz

He noted that it is long past time to feature an iconic Canadian woman on a banknote and that it has been a goal of his since he became governor.

Poloz emphasized that even with the proliferation of digital payments, the number of physical notes in circulation keeps increasing.

The Bank of Canada got Canadians directly involved in the decision-making process for the new $10 note. More than 26,000 nominations were received, including one from Robson.

The new $10 note will go into circulation later this year.