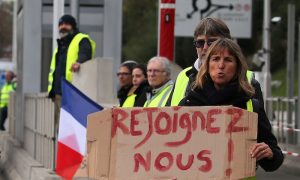 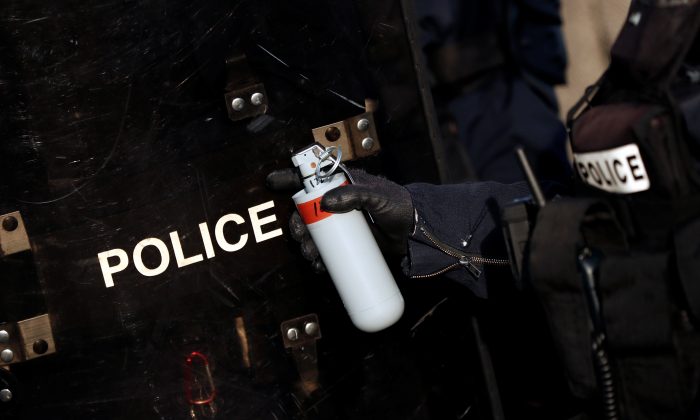 A French riot police officer holds a tear gas grenade during a demonstration by the "yellow vests" movement in Paris on Feb. 16, 2019. (Benoit Tessier/Reuters)
Europe

PARIS—The heavy-handed policing of anti-government “yellow vest” demonstrations, during which thousands of protesters have been arrested and many wounded, reflects a steady erosion of civil liberties in France, the country’s human-rights watchdog said.

The independent watchdog called for policing methods to be modernized, citing changes in Germany and the United Kingdom, in a report released on the day the Senate was expected to approve a bill giving police greater powers to act against protesters.

“Like a poisoned pill, the state of emergency that was in place for two years, gradually contaminated our common law, undermining the rule of law as well as the rights and freedoms on which it is based,” Toubon wrote in his report.

This “helped to lay the foundations for a new legal order, based on suspicion, in which fundamental rights and liberties have been somewhat weakened.”

Police tactics have come under scrutiny, including the use of crowd control weapons that include “flash ball” riot guns that fire rubber ball-shaped projectiles and dispersal “sting-ball” grenades.

Toubon said police had also made an unprecedented number of “preventative” detentions at “yellow vest” protests.

France ended a two-year state of emergency in November 2017, but replaced it with a tough security law that gave police extended powers to search properties, conduct electronic eavesdropping, and shut down mosques suspected of preaching hatred.

“You never use force out of pleasure, but out of duty. I won’t let it be said that you are a threat to rights, when you risk your lives each day to ensure rights are respected,” Castaner wrote on Twitter.

Now, in response to the rioting and violence witnessed during “yellow vest” protests, the Senate is expected to approve in a final vote legislation that would hand police power to search protesters and prohibit demonstrators from covering their faces.

The bill was initially tabled by the center-right-led Senate. The lower house, where Macron’s centrist party has a comfortable majority, passed the bill last month.

But an unprecedented number of Macron lawmakers abstained, while one lawmaker left the ruling party the day after, underscoring growing unease within the majority over the government’s lurch to the right.

Macron told his cabinet on March 11 that he would ask the Constitutional Court to examine the constitutionality of the new law, in a bid to assuage the left-leaning wing of his majority.

The “yellow vest” protests started last November as an outcry against Macron’s plan to hike fuel taxes, but morphed into a broader, leaderless movement decrying the government as out of touch.