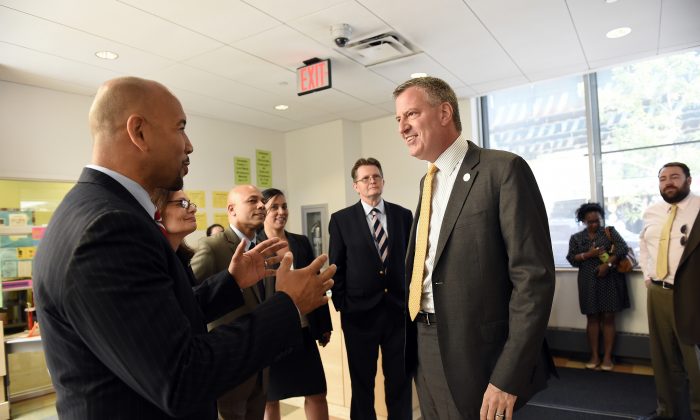 NEW YORK—The city has invested $52 million to create 40 community schools that will open this September, Mayor Bill de Blasio announced Tuesday. The city will also double the capacity of the summer enrichment program for middle school students from 17,000 to 34,000 seats.

Before he was elected, de Blasio committed to creating 100 community schools by the end of his first term, but has not made any significant announcements in this regard until Tuesday.

Community schools are public schools, which offer additional medical, nutrition, and social services to children, their parents, and the neighboring community.

The mayor made the announcement in one such school, M.S. 327 in the Bronx. The school has a parent room, a full-time doctor, a registered nurse, a rooftop garden, a community center, and offers swimming lessons, among other benefits.

For de Blasio, community schools are a part of a multifaceted approach to improving schools, which includes universal pre-kindergarten and after-school programs, increasing parent engagement, and reducing the reliance on standardized testing, among other things.

“All of these pieces have to synergize to create a very different and better school system,” de Blasio said.

Neither de Blasio nor Schools Chancellor Carmen Fariña would define clearly what a community school is, saying that each school is different and that services will be selected based on the community’s need.

“There is not one cookie-cutter model,” Richard Buery, the deputy mayor for strategic policy initiatives, said.

Prior to becoming the deputy mayor, Buery led the Children’s Aid Society, which has operated 16 community schools in the city since 1992. Studies conducted at these schools show that students who go there have improved attendance and better parent involvement, among other benefits, compared to conventional schools.

The expansion is part of the mayor’s promise to provide an after-school seat to every middle school child who needs one. That effort is funded with $145 million from the state. Those funds will grow to $190 million in fiscal year 2016.

The Education Department selected 271 providers to run the summer enrichment programs. The programs are designed for children between the ages of 11 and 13, and include activities like learning ecology at the Staten Island Zoo, or learning about the life of plants at the New York Botanical Garden, arts, and physical education.

“I think this investment is huge,” said Bill Chong, the commissioner of the Department of Youth and Community Development. “This investment will impact a generation of young people.”

De Blasio urged parents to apply for the programs online at www.nyc.gov/dycd or via the phone by calling 3-1-1.