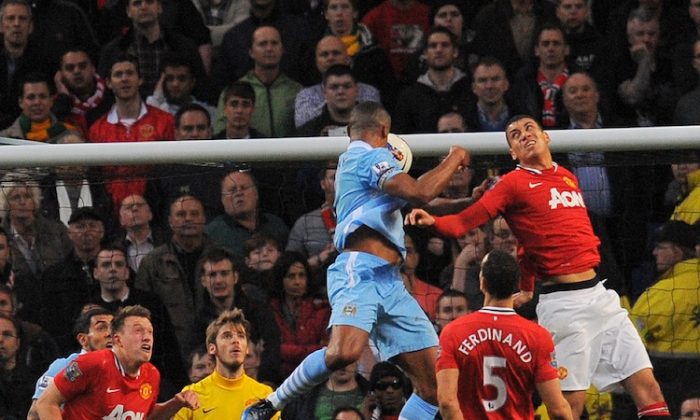 Manchester City downed their archrivals Manchester United 1–0 on Monday to take over first place in the English Premier League with two games left to be played. City captain Vincent Kompany scored the game’s only goal with a powerful header in the first half.

It was called arguably the biggest English Premier League match ever—the Manchester Derby between Manchester United and Manchester City with the title up for grabs. According to ESPN, 650 million viewers around the world would be tuning in. Diego Maradona was even in attendance, no doubt hoping his son-in-law Sergio Aguero would score.

City began the day in second place, three points behind United, needing a win to keep their title hopes alive. United would have been happy with a draw.

If Manchester United wants to get their 20th title, it will have to go through their “noisy neighbors” Manchester City. City, meanwhile, won its last title in 1968—one of only two titles.

Just three weeks ago, United were ahead by eight points, but they lost away to Wigan and were coming off an incredible 4–4 draw at home to Everton after leading by two goals with just seven minutes left to play.

Roberto Mancini opted to start Carlos Tevez, who had been key to City’s resurgence despite his love-hate relationship with the club. Tevez had taken on the role of the enigmatic Mario Balotelli who was named to the substitute’s bench.

Sir Alex Ferguson chose to go with his “European away” formation, playing a 4–5–1 setup with the Korean Ji-Sung Park in the lineup. The lineup would hamper United’s attacking efforts, especially without winger Antonio Valencia in the starting XI. Ferguson relied on his veterans Paul Scholes, 37, and Ryan Giggs, 38, who have served him so well over the years.

United began the game brightly but City wrested control with their short passing possession game. With the likes of Samir Nasri and David Silva probing the staunch United defense for weaknesses, City were largely frustrated.

But on their sixth corner of the first half, in injury time, Kompany rose above his markers and headed past David De Gea in the United goal. City had taken a well-deserved 1–0 lead as defenders Chris Smalling and Rio Ferdinand failed to deal with Kompany and De Gea had no chance.

Kompany had been sent off in the FA Cup third round Manchester Derby clash that United had won 3–2. His leap of joy after scoring the goal delighted the City fans.

City had been the better side and now United would be forced to attack, making for an entertaining proposition for the millions of viewers.

In the second half, Mancini brought on Dutch hard man Nigel De Jong in place of Tevez in the 68th minute for better cover on defense.

The tensions were palpable as the game wore on and even the two managers Ferguson and Mancini got into a brief shouting match before being separated.

Ferguson brought on Danny Welbeck and Antonio Valencia to boost the attack, while Mancini began relying increasingly on the counterattack. Yaya Toure, the lanky midfielder from the Ivory Coast, became City’s biggest threat with his driving runs.

United were simply unable to establish any control of midfield and City continued to dominate possession and generate scoring chances even with a more defensive-minded setup.

Five minutes of added time only prolonged the misery for United who were clearly second best on this night.

“We needed the three points,” said City’s Gareth Barry in an interview on ESPN after the match. Barry attributed his side’s victory to “Just being solid, the way we defended, the way we stopped Wayne Rooney.”

Of course, the title is still up for grabs and City face a difficult game away to Newcastle on Sunday.

“It’s still neck and neck. Newcastle have had a great season and are desperate to put one over on us,” said Barry.

And cue the celebrations for City fans as “Hey Jude” and Oasis songs wrang out at Etihad Stadium after the match.