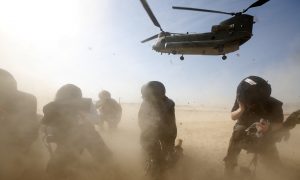 A Murdered Marine and His Father’s Fight for Justice
0 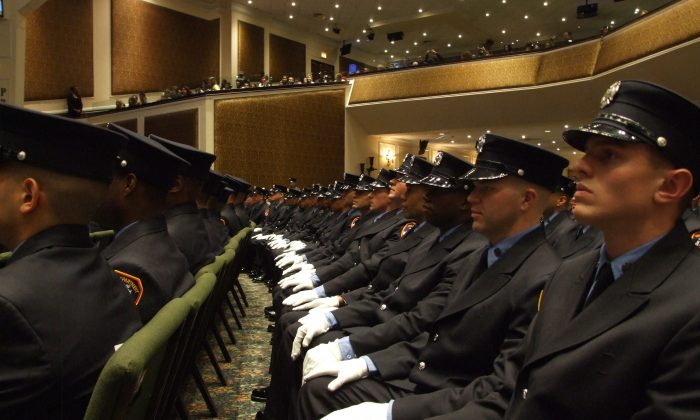 Probationary fire fighters sit during a graduation ceremony at the Christian Cultural Center in New York, Dec. 5, 2013. Their graduating class was the most diverse in Fire Department history with 62 percent minorities. (Holly Kellum)
New York

NEW YORK—The city settled a seven-year racial discrimination lawsuit against the New York Fire Department Tuesday, agreeing to pay $98 million in back pay to 1,500 black and Hispanic people who took firefighter civil service exams in 1999 and 2002.

The city also agreed to implement measures that would increase diversity in the FDNY, which include a court-appointed diversity officer, and an increase in efforts to recruit more black test takers for the department exams.

In 2007, a two-year federal civil rights investigation by the Justice Department found that the FDNY entrance exams administered in 1999 and 2002 discriminated against black and Hispanic test takers. The investigation was spurred by the Vulcan Society, a group of black firefighters, which later joined the lawsuit against the city.

“This is a great day in the city of New York,” said Capt. Paul Washington, a past president of the Vulcan Society.

“And we hope that this is the beginning of a new day for the New York City Fire Department.”

Tuesday’s settlement with the Justice Department comes less than two months after Mayor Bill de Blasio announced that he will end the city’s appeal to a decision by a federal judge against the city’s use of the stop, question, and frisk policing practice. The judge ruled that the practice disproportionately affected people of color.

The outcomes in both lawsuits are a victory for civil rights advocates and for de Blasio, who won a landslide election with a promise to end what he calls “an inequality gap that fundamentally threatens our future.”

“The brave men and women of the FDNY work tirelessly to keep us safe from harm’s way and our administration is committed to ensuring every New Yorker who seeks to take on this heroic role has a fair opportunity to join the ranks,” de Blasio said in a press release.

The Fire Department has been making strides to hire more minorities since 2002. Diversity has steadily increased over the course of the past decade, with double the minorities in the department today compared to 12 years ago. In December last year, FDNY’s most diverse class graduated with 62 percent minorities. Minorities also represented 40 percent of the incoming fire academy students in 2013.

“We’re pleased this case has been settled and look forward to our next firefighter exam when we hope to attract even more people of color than the 19,000 who took the last test in 2012,” Fire Commissioner Salvatore Cassano said in an email.

The $98 million in the settlement will be paid out to 1,500 black and Hispanic people who took but did not pass the 1999 and 2002 civil service exams, averaging to about $65,000 per person. Some firefighters who took the exams, but whose employment was delayed, are also eligible.

Besides back pay, the settlement includes more than $6 million to cover lost medical payments, fringe benefits, and interest. It also allows for firefighters to be assigned to firehouses in neighborhoods where they live. The payment method hasn’t been determined and will have to be approved by a federal judge.

The city agreed to make efforts to increase the number of black people taking the civil service exam to match the demographics of black New Yorkers in the labor market and then exceed it by 3 percent. Blacks made up nearly 23 percent of the labor market in New York City, according to 2010 data from the New York State Department of Labor.

Under the settlement, the Fire Department will have to create a new executive position of chief diversity and inclusion officer who will report directly to the fire commissioner. That officer will also appoint a diversity advocate, who will oversee transparency, fairness, and respect for firefighters candidates in the recruitment process, and for students in the fire academy.

The department will also have to provide more transparency about medical standards and components of the medical exam.

Federal Judge Nicholas Garaufis, who had ruled in 2010 that the city engaged in intentional discrimination in and over the course of 2011, imposed the reforms agreed to on Tuesday.

The city appealed the decision in 2012 asking that the case be assigned to a different judge. The appeals court overturned Garaufis’s ruling in 2013 and struck down most of the remedial changes. A new trial was set to begin on March 31 this year.