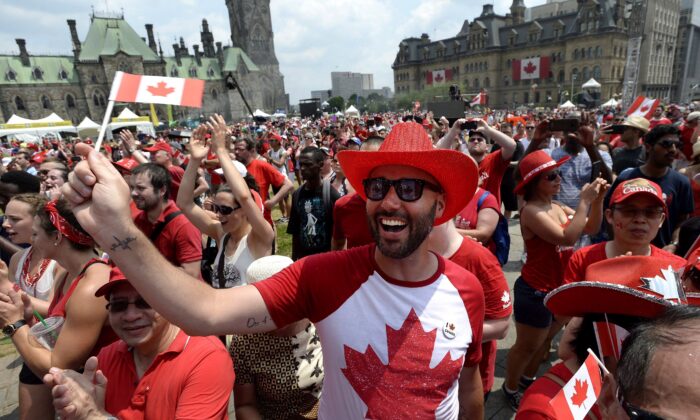 As Canada Day festivities make a comeback on July 1 after a two-year hiatus, authorities in Ottawa say they’re prepared to handle big crowds and potential protests.

“I want to assure everyone that the RCMP, Ottawa Police, Police de Gatineau, and the Parliamentary Protective Service are fully prepared to respond to any situation,” said Ottawa Mayor Jim Watson at a press conference on June 27.

Watson said he would not be “intimidated” by groups that plan to “disrupt the celebrations.”

“I encourage people to come and have a peaceful, joyous occasion in our nation’s capital. And those people who are coming here to disrupt those wonderful celebrations will be dealt with with the full force of the law, and there are not going to be warnings and second chances if the law is broken,” he said.

Authorities are preparing for events planned by pro-freedom groups in the capital on Canada Day.

The main concern is a repeat of the Freedom Convoy protest in February, which Ottawa interim chief Steve Bell said has scarred some residents who live in the city’s downtown core.

“There are deep scars and wounds held by the people that live in those areas,” said Bell during the press conference.

There is no credible information that such a scenario is about to repeat itself, and the precautions taken by the city would make it unlikely that vehicles can park very close to the city’s downtown core again. But some media outlets and politicians have repeated inflammatory claims by a Twitter account that purports to be associated with convoy protests—which has turned out to be incorrect.

“1,000s of trucks are making their way back to Ottawa. They don’t plan on leaving until Justin Trudeau resigns,” posted the account CanDayConvoy on June 18.

The tweet has since been deleted, but other content from the account has been republished, such as a claim that Conservative leadership candidate Pierre Poilievre supports the CanDayConvoy “100%.”

“I have since deleted [the tweet] given that I have come to believe the account is not perhaps as genuine as it claims to be,” wrote Gerretsen on June 26.

Some pro-freedom groups are planning peaceful protests during the July 1 festivities.

Veterans for Freedom says there will be a protest in front of the Supreme Court, a march to Ottawa City Hall, and a dance party on Parliament Hill.

The group has a mission to engage in “lawful civic action in order to restore the fundamental rights and freedoms of Canadians,” according to its website.

Police on Guard, a group that consists of active and retired officers opposed to the use of emergency powers by governments during the pandemic, is organizing a family picnic with special guest veteran James Topp, who by that time will have completed his walk across Canada to protest vaccine mandates.

Chief Bell, who will be overseeing a force augmented by officers from other police corps such as the RCMP and the OPP, said people will be allowed to protest lawfully and peacefully.

But Bell noted he would not allow structures to be set up, including speakers for a dance party and tents for camping.

Journalist and activist Andy Lee, who has a large following on social media, had announced she would try to camp on Parliament Hill in recent days. She told The Epoch Times her plan still stands despite Bell’s warning.

With reporters at the press conference raising concerns about potential violence and another convoy, Bell insisted his service is ready for whatever comes while shifting the focus to the festivities instead of potential unrest.

“We’re planned, we’re prepared, and we have the resources. In that, I actually don’t want to lose the focus on what Canada Day is—it’s an opportunity for people to come down and celebrate our nation,” Bell said.

“Canada Day is a very sacred day in this country and people need to be able and be assured that the police and all of our partners and all the city have their safety front-and-centre and that they can come down and participate in those festive events,” he added.