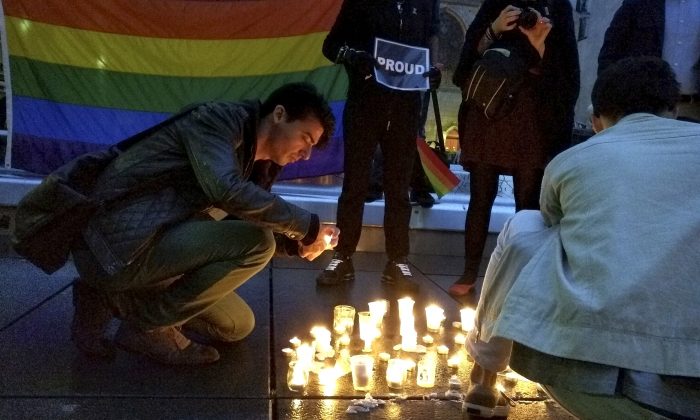 A man lights a candle during a spontaneous vigil to remember those slain and wounded at an Orlando nightclub, Sunday June 12, 2016 in Paris. (AP Photo/Raphael Satter)
Crime and Incidents

City of Orlando Releases Names of the 49 Victims

UPDATE: As of late June 13, all 49 victims’ names have been released.

The City of Orlando’s official website has been steadily releasing the names of the victims from the June 12 Pulse nightclub shooting.

The shooter has been identified as Omar Mateen, who carried out America’s deadliest shooting in the nation’s history.

Orlando’s mayor has confirmed that all 49 deceased victims have been identified.

The youngest victim is just 18 years old, with the oldest being 50. Twenty-seven of the 49 are under the age of 30, with almost all of the victims aged under 40.

A statement from Orlando Health states that all of the hospitals within the network, including ORMC, are open and fully operational. The medical centers are all accepting patients into their respective ERs and are performing procedures and duties as planned.

The updated statement from the City of Orlando reads:

“During this difficult time, we offer heartfelt condolences to the families of the 49 victims who lost their lives during the Pulse tragedy. To the families and friends of the victims, your city is with you and will continue to be with you as you deal with this unimaginable tragedy.”