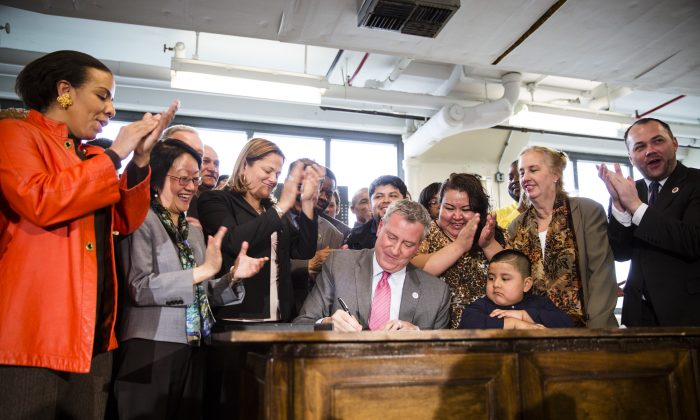 NEW YORK—Mayor Bill de Blasio signed his first bill Wednesday at a converted factory in Bedford-Stuyvesant in Brooklyn. The bill expands the number of workers eligible to receive paid sick leave by 500,000.

The signing ceremony, and the bill, were a significant departure from a City Hall ruled for 12 years by de Blasio’s predecessor and oft adversary Michael Bloomberg.

Introduced in City Council three years ago, it was bent and weakened under the business-friendly guise of Bloomberg, frustrating advocates.

Upon taking office, de Blasio, who promised to undo the harm, saw an expanded and strengthened version rushed through the legislative process. Late last month the new council passed it by 46 voted to 5.

With his signature, de Blasio, a progressive Democrat, has thrust New York City into a growing national trend of municipalities foregoing the federal government to extend paid sick leave benefits to their residents.

“In a perfect world, these are the kind of things our federal government would’ve taken on a long time ago,” de Blasio said. “We all know that that’s not possible right now. It’s a sad reality.

The first paid sick leave legislation was passed in California in 2002. Since then, Newark and Jersey City in New Jersey, Seattle in Washington state, as well as Washington, D.C., joined the trend. In 2012, Connecticut became the first state to provide paid sick leave.

Federal lawmakers followed through in 2014. New York Sen. Kirsten Gillibrand and Congresswoman Louise Slaughter introduced a federal bill, the Family and Medical Insurance Leave Act, which would provide paid sick leave to employees in companies with 50 or more employees.

“I think it’s a trend and I believe it will continue,” said Sharon Stiller, director of the employment law practice at Abrams Fensterman. “Society believes that people should be able to take sick time and they shouldn’t suffer as a result.”

The success of the paid sick leave bill in New York City is also likely to boost the trend nationwide. Stiller likened it to the indoor smoking ban, which, after being enacted shortly after Bloomberg became mayor, became a catalyst for a nationwide movement with many states following suit.

Paid sick leave laws did not have significant negative effects in the cities and states which have adopted them, a reassurance to business advocates who fear a worst case scenario. Research shows that the laws have little or no impact on profits, while boosting morale and lowering turnover.

Connecticut employers reported minimal impact on profits in a study conducted by the Center for Economic and Policy Research released this month. Only 6.5 percent reported that costs rose 5 percent or more.

The paid sick leave law becomes effective in New York City on April 1. Employees in companies with five or more employees will begin accruing earned sick leave time on that day—one hour for every 30 worked. The law requires that employees work at the same company for four months before taking paid sick time off.

Businesses with 5 to 19 employees will not be subject to penalties until Oct. 1, giving them time to adjust and comply.

The Department of Consumer Affairs (DCA) is implementing and enforcing the law. The agency, which had minimal information for employers or employees three days ago, has alleviated concerns by posting a comprehensive list of frequently asked questions and answers, mandatory employee notices, and other materials on its website.

DCA officials said that complaints can be filed online or by calling 311. The agency will focus on mediating complaints with a goal to secure back pay for employees, according to Alba Pico, the deputy in charge of DCA before de Blasio appoints a new commissioner.

Steve’s Ice Cream, housed on the fourth floor of the building where de Blasio signed the bill, already provides paid sick leave to its employees. The small-batch ice cream maker depends on a loyal workforce both for quality and for creativity, said David Stein, the chief executive officer of Steve’s Ice Cream.

The mayor sampled four flavors on his way out from the signing ceremony: Brooklyn Blackout, cold-brewed cinnamon coffee, vanilla burnt-sugar, and salty caramel. De Blasio stuck with a pint of vanilla burnt sugar, a dairy-free ice cream made with coconut cream, vanilla beans, and swirled with “burnt sugar shards”—a combo the mayor found pleasing to the palate and to the ear.

De Blasio was surprised that his pick was nondairy, but disappointed to find it wasn’t a low-calorie product. Stein said that Steve’s ice creams are more about “spiritual and emotional health.”