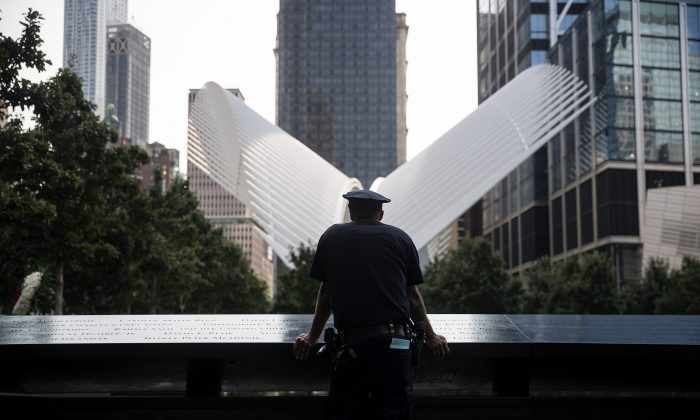 In this file image, an NYPD officer pauses at the National September 11 Memorial, September 11, 2017 in New York City. (Drew Angerer/Getty Images)
US News

First, the city officials painted out the word “Lord” from a prayer carved into a monument to fallen officers, after complaints that public grounds should be secular.

Now, following a widespread backlash against that decision, they have completely removed the stone monument that featured “The Officer’s Prayer” from where it stood outside the new police station in Tega Cay, South Carolina.

Tega Cay officials say that the monument will stay down while they try to find a “solution.”

The monument had been donated by the Tega Cay Women’s Club. On the back was inscribed the prayer, which used the word “Lord” three times.

The monument has been removed after the debate over the use of the word ‘lord’ made national headlines. https://t.co/TFh44tRs2C

Several people complained when a monument was placed outside the new Tega Cay po… https://t.co/Bb4HceK9MI pic.twitter.com/XNae93iXPx

Tega Cay’s city manager said the monument was modeled after others that appear across the country at various levels of government, according to NBC Charlotte.

According to local reports, city management was advised by lawyers to remove the word “Lord” from the monument following complaints.

Those complaints started with an email from resident Dann Dunn, reported The Herald, who spoke out against the wording at a council meeting.

Dunn, who says he is a church-goer, said he isn’t offended by religious reference.

“What I do have a problem with is religious references on government property, especially law enforcement,” Dunn said. “Public grounds and public services should remain secular and neutral for all members of the community—all members—so they should feel welcome here.”

The removal of the word, however, sparked a heated backlash, prompting a further response from the city.

“We have received many comments, both locally and nationally, in response to the monument at the Tega Cay Police Station,” said a city council statement issued on July 23.  “We attempted to find a compromise but failed as our community has further divided. In an attempt to find a resolution, we have upset parties on both sides of this issue and for that we are truly sorry.”

We have received many comments, both locally and nationally, in response to the monument at the Tega Cay Police Station….

“At this time, we have removed the monument while we continue to seek a solution that expresses our unwavering support and gratitude to those who risk their lives every day for ours. We will continue to welcome feedback from our residents and seek further guidance from our legal team until we can find a viable solution for all concerned.”

On the city council Facebook page, many locals reject the characterization of the issue as being equally balanced, saying that only a handful of people had objected. The majority of comments appear to be in support of the monument in its original state.

“Saul Alinsky would be proud,” wrote one local, in reference to the radical leftist who espoused methods of undermining Western values and traditions. “The new world order is upon us, and the last beacon of hope for this planet, the United States, is circling the drain because of so-called ” tolerance “. It’s like watching the collapse of the Roman Empire with Wi-Fi. It should’ve been stopped years ago, but now it’s too late. Progressivism has destroyed the greatest nation this planet has ever seen. So sad.”

“You know the last time I checked, it was ‘One nation under God.’ To have this scratched out is sad, to say the least,” Congressman Norman said in the video. “That’s why we’re fighting in Washington, D.C., to put God back in public to buildings like this to put God back in our public schools.”

Tega Cay is a city with a population of around 10,000 in York County, South Carolina, just over the state border with North Carolina.

The wording of the prayer is as follows:

Lord, I ask for courage—

Courage to face and conquer my own fears …

Courage to take me where others will not go …

Strength of body to protect others, and strength of spirit to lead others …

I ask for dedication—

Dedication to my job, to do it well,

Dedication to my community, to keep it safe …

Give me, Lord, concern for those who trust me,

and compassion for those who need me …

And please, Lord, through it all, be at my side …