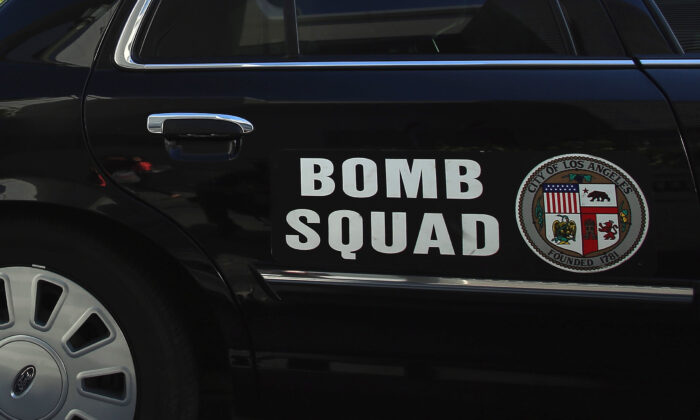 In this file photo, a bomb squad car is seen in Los Angeles on April 16, 2013. (Jeff Gross/Getty Images)
Southern California

LOS ANGELES—The Los Angeles City Council Tuesday passed a motion introduced by Councilman Curren Price to identify $5 million in funding—some of which would come from the Los Angeles Police Department (LAPD) budget—to help a South Los Angeles neighborhood recover from a massive explosion set off by an LAPD bomb squad error that injured 17 people and forced many residents from their homes.

The June 30 detonation of a large cache of fireworks on East 27th Street, near San Pedro Street, sent 17 residents and first responders to hospitals, destroyed a bomb squad truck, and damaged 22 residences, 13 businesses, and 37 vehicles.

The motion, which was seconded by Councilmen Marqueece Harris-Dawson and Mark Ridley-Thomas, instructed the chief legislative analyst and the city administrative officer to identify $5 million to the recovery effort and establish a Neighborhood Recovery Center with additional services to support residents’ needs, including infrastructure improvements, mental health services, job and workforce development, access to children’s services, and business grants.

Price’s motion requests that some of the funding for the relief effort come from the LAPD’s $1.76 billion budget.

According to Michael Hoffman, special agent in charge of the U.S. Bureau of Alcohol, Tobacco, Firearms and Explosives Los Angeles office, the LAPD’s containment vessel was designed to handle repeated detonations of 19 pounds of TNT equivalent at a time or a single detonation of 33 pounds of explosives before being returned to its manufacturer for analysis.

But the LAPD bomb squad miscalculated the amount of fireworks placed into a containment vessel, resulting in a massive explosion that damaged several residences in South Los Angeles.

Officers had loaded the truck with 39.85 pounds of explosives, Hoffman said. LAPD personnel visually estimated the weight of the explosives to be about 16 pounds.

Following the blast, Price provided relief to displaced and impacted residents through a $1 million emergency relief fund using dollars from his council office.

The city has received about 200 claims for damages from community members, Parks told the Police Commission on Tuesday.

Twenty-six claims have been paid, and about 25 are pending payment.

The City Attorney’s Office is waiting for more information before processing 128 of the claims.

Residents last Thursday protested in front of their boarded-up homes, which remained unrepaired by the city, to demand the city accelerate the timeline for the repairs.