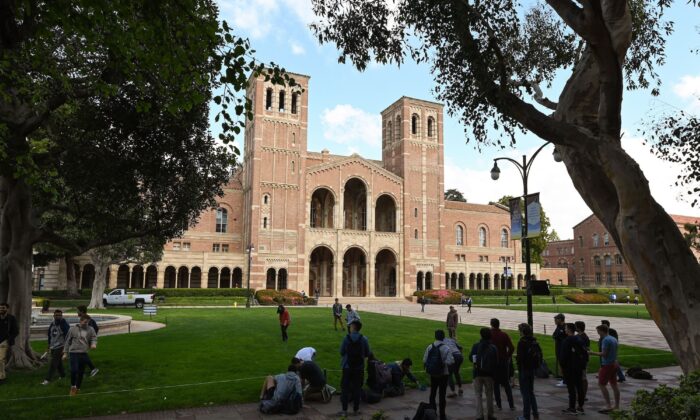 Students participate in an activity near Royce Hall on the campus of the University of California–Los Angeles (UCLA) in Los Angeles, Calif., on March 11, 2020. (Robyn Beck/AFP via Getty Images)
Southern California

A candidate for the Los Angeles City Council said she was disinvited from speaking at a student political organization at the University of California–Los Angeles (UCLA) because her views did not align with the views of the club.

LA City Council District 5 candidate Kristina Irwin said she was invited to speak to Bruin Democrats at UCLA in January—but just a week later the club told her it “will no longer be able to host” her due to differing views.

“Upon further discussion with the board, we came to the realization that your platforms do not resonate with our membership, thus we thought it would be best not to waste your or our time,” the club told Irwin in an email, though they did not specify which of Irwin’s views differed from the club’s.

Irwin, an independent, said she was “mortified” by the club’s decision.

“It’s a non-partisan election,” Irwin told The Epoch Times. “It doesn’t matter if somebody’s a Republican conservative or a liberal Democrat—the whole point is that [the club] interviews the candidates to [speak] about what [the candidates] will implement if they take office.”

Irwin, a real estate agent, said she was planning to speak on key Los Angeles issues such as public safety, crime, and homelessness.

Irwin has been vocal in her opposition to mask and COVID-19 mandates and her support of law enforcement and policies that are tough on crime.

“I’m the only candidate that’s been there at the forefront since this whole school shutdown happened, and I’m the only one that has kids in the LA Unified School District. … This is just me trying to do what we need to do for the community because everybody’s sick of how it’s been handled.”

When it comes to homelessness, she said she believes that efforts to add more housing are helpful, but they are ultimately a “band-aid” solution. If elected, she said her focus would be on re-purposing abandoned buildings into triage centers where people can get medical and mental health treatment, as well as rehabilitation and vocational training.

“If those ideas don’t resonate with the Bruin Democrats that’s truly a shame,” Irwin said.

The Bruin Democrats at UCLA did not respond to repeated requests for comment by press deadline.

UCLA lies in the heart of District 5—and the district’s seat is up for grabs this year when current Councilman Paul Koretz terms out. Koretz is seeking a bid for the city’s controller.

There are currently nine candidates in the race for District 5.

District 5 candidate Josh Nadel, a business owner who serves on the Palms Neighborhood Council, told The Epoch Times he didn’t receive an invitation from the club.

District 5 candidates Dory Frank, a publicist, and Daniel Bahr, a businessman, were not immediately available for comment.

“Scott is truly grassroots progressive with the leadership experience necessary to forge a Los Angeles that is affordable and inclusive for all,” the club wrote on Instagram. “His attentiveness to student issues has not gone unnoticed, and we’re optimistic that with Scott in office, we have someone that will fight for us at City Hall. Time to organize for [Epstein].”