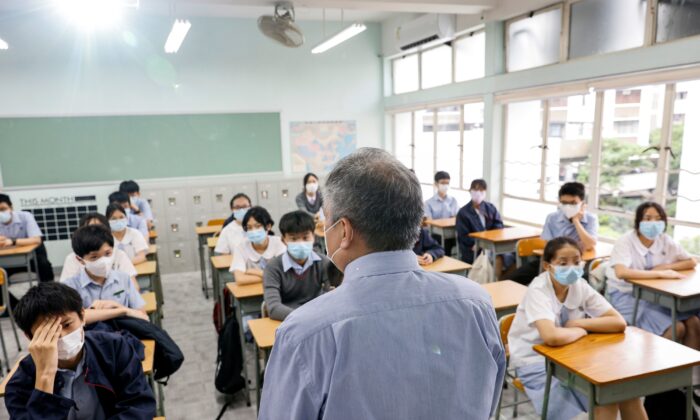 A teacher introduces himself to the students in a classroom at a secondary school, during the first day of the new term, in Hong Kong on Sept. 1, 2021. (Tyrone Siu/Reuters)
Hong Kong

Citizenship and Social Development Is a Subject of Nonchalance

The past 15 years witnessed dramatic changes in Hong Kong’s education sector. The Hong Kong Diploma of Secondary Education (HKDSE), first taught in 2009 with the first cohort of candidates in 2012, had two selling points back then: a compulsory Liberal Studies (LS) that combines arts and science education and promotes independent thinking, and school-based assessment elements in all subjects.

This New Senior Secondary academic structure, which aimed at promoting critical thinking and independent learning, underwent an overhaul in the decade after its implementation, with the above two significant reforms rescinded for political and academic reasons. Even the very concept of critical thinking was questioned by Education Bureau, which amended its Chinese translation to “cautious thinking” because the pro-establishment camp took “critical” as “criticize,” conveying too much negativity.

Stakeholders are concerned about how far Hong Kong’s education will go backward with the replacement of LS by Citizenship and Social Development (CSD).

Pedagogically, students are not taught to handle issues using the dichotomous approach of “positive” and “negative,” which had existed since immemorial; at the same time, the new subject emphasizes the nurturing of students’ positive values and attitudes. It is thus not difficult to tell that negatives are not encouraged in issues related to China.

In reality, “positive values” are mostly “government values,” clearly shown in the sample papers designed by HKEAA, which are overwhelmingly based on official publications. In addition, the textbooks explicitly adopt the official position of the Chinese Communist Party, such as asserting that “Hong Kong was never a colony,” implying that this new subject is brainwashing and falsifying history.

What do frontline teachers think about this subject? A Mr. Cheung (pseudonym), who has been teaching History for more than 30 years, will teach CSD in the coming academic year. Asked about brainwashing, he sighed, “it’s difficult to avoid. We only use official CSD teaching materials or approved textbooks.”

He said that teachers had no choice but to adopt the official views. “The Chinese government has never recognized the unequal treaties, so it does not recognize Hong Kong as a colony; it was only temporarily unable to resume its rule over Hong Kong. In the 1970s, the Chinese government asked the United Nations to remove Hong Kong and Macau from the list of colonies, and the UN agreed. Britain also removed the word colony from Hong Kong’s banknotes.”

When asked whether he would tell the truth about history and tell the students the problematic textbooks, he said, “I don’t think so. I’m a mediocre breadwinner who kowtows to anyone who gives me a job.”

He also talked about what kind of teacher is most suitable to teach the subject. “In my friend’s school, the CSD panel head teaches Mathematics and DAT (Design and Applied Technology). I think he represents the best CSD teachers with neither the subject knowledge nor commitment to History. He will not feel sad reading the texts aloud.”

Ms. Shek (pseudonym), who has been a teacher for ten years, criticized the various designs of CSD as impractical. ‘The exam results will be reported as either “attained” or “unattained;” teaching and learning are both boring as there is no room to teach the art of argument. Teachers will certainly teach half-heartedly. And then, they will send directorate staff to inspect the schools, to “knock the mountain and shake the tiger” (a Chinese idiom meaning giving a serious warning)—what a melodrama.

The curriculum states that events or topics which are illegal or immoral should not be used for inquiry learning. In fact, the family responsibility system (bao zhan dao hu), a representative policy of Deng Xiaoping’s “Reform and Openness” policy, was initially illegal, and the very first Anhui village did it had all the villagers sign a death deed before doing that. If the CSD curriculum is to be implemented word for word, such “illegal” events should not be covered.

‘The mainland study tours are even more stupid. You can judge how much care those guys have for the students by saying that only those students with broken legs and serious illnesses may be exempted. Seriously, how expensive is it to get a sick note from a doctor? Or what if a student loses his or her mainland travel permit the day before the tour?”

LS and other HKDSE elective subjects each have 250 hours of learning time, tested by at least two papers, whereas CSD only has 150 hours and only one paper. When first made known to the public, CSD was called a “renamed subject,” which means the Education Bureau did not care about its name and just wanted to get rid of LS. Everyone can feel how politicized the subject is, how academic the subject can remain, and how sloppy the reform is.

No wonder Stanley Ng Chau-pak of the Hong Kong Federation of Trade Unions worries that “teachers will teach and students will learn with nonchalance.”