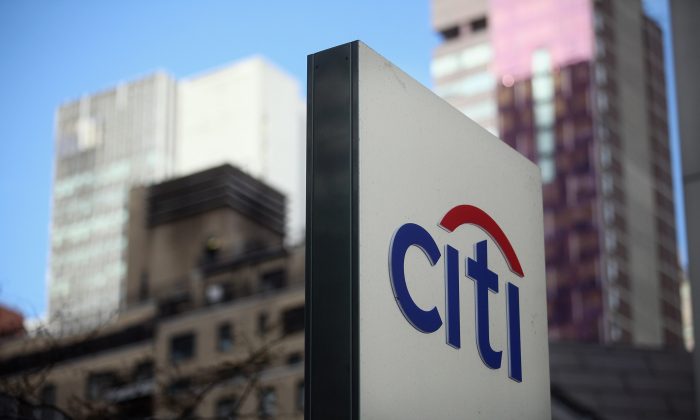 A 'Citi' sign is displayed outside Citigroup Center near Citibank headquarters in the Manhattan borough of New York City on Dec. 5, 2012. (Mario Tama/Getty Images)
Stocks

Citigroup Inc. said on May 2 that a so-called “flash crash” in European stock markets occurred when one of its traders made an error.

The acknowledgment came just hours after the stock market experienced an extremely rapid decline in the price of a number of assets, something that traders often refer to as a “flash crash” and which is caused by human error.

That swift decline prompted trading in several European markets to be briefly suspended. At its peak, the incident wiped out 300 billion euros ($315 billion) from the market within just minutes.

“This morning one of our traders made an error when inputting a transaction. Within minutes, we identified the error and corrected it,” the New York-based bank said in an emailed statement to Fortune.

The Epoch Times has contacted a Citigroup spokesperson for comment.

The mistake saw Nordic stocks hit the hardest, with Sweden’s benchmark OMX 30 declining as much as 7.9 percent before recouping most of the losses to close the day 1.9 percent lower.

The STOXX Europe 600 index of Europe’s leading shares fell as much as 3 percent before closing down 1.5 percent.

Other indices also plunged including in countries from Germany to Italy and France, but they were later able to recoup the losses.

Sweden’s financial supervisory authority said May 2 that it was investigating the incident and was in contact with U.S operator Nasdaq Inc., CNBC reported.

The Nasdaq Stock Market—the primary securities exchange of the Nordic countries, including Sweden—quickly ruled out the possibility of an error in its systems.

“We have now excluded both. It is very clear to us that the cause of this move in the market is a very substantial transaction made by a market participant,” Augustsson said.

In addition to reputational damage to Citigroup, the May 2 incident could also incur some hefty monetary damage, given that Nasdaq said it will not cancel any trades made on the Nordic markets, according to Bloomberg.

This isn’t the first time that such an incident has happened at Citigroup.

In 2020, a trader at the bank accidentally transferred a nearly $900 million interest payment to creditors of the cosmetics company Revlon Inc. instead of the intended $8 million.

Citigroup Inc. blamed human error for the mistake, and the bank was fined $400 million by U.S. regulators for failing to correct longstanding deficiencies in its risk and control systems.