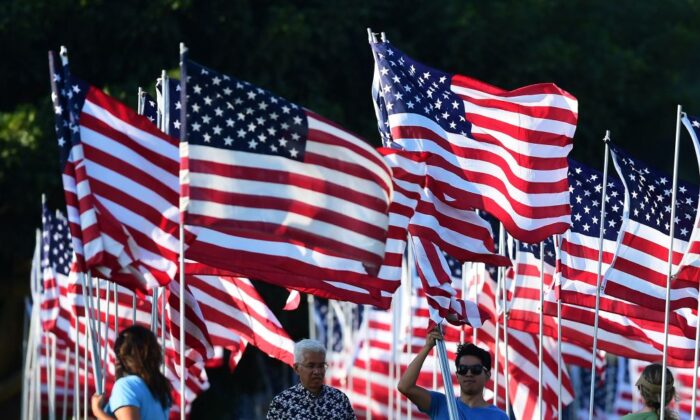 People help unfurl American flags to commemorate the 20th anniversary of 9/11 during the annual Waves of Flags display and remembrance at Pepperdine University in Malibu, Calif. on Sept. 8, 2021. (Frederic J. Brown/AFP via Getty Images)
Southern California

Counties Across Southern California to Commemorate 21st Anniversary of 9/11

As the nation mourns the great loss Sept. 11 of nearly 3,000 people 21 years ago in the terrorist attacks on 9/11, several memorials and remembrances are held across Southern California.

The city and county leaders will gather Sunday for a ceremony at the Los Angeles Fire Department’s Frank Hotchkin Memorial Training Center.

Mayor Eric Garcetti and Fire Chief Kristin Crowley will ring 10 bells, and the ceremony will also include bagpipers and a helicopter flyover.

The ceremony is closed to the public due to COVID-19 health concerns but will be streamed online.

Long Beach Police Department Chief Wally Hebeish added: “With each year that passes, it is important that we pause on this day and remember all those we lost and the families that they left behind.”

In Beverly Hills, the fire department headquarter hosts an informal ceremony at 6:45 a.m., followed by a remembrance at the Beverly Hills Memorial Garden in the evening.

Holocaust Museum LA in Pan Pacific Park in the Fairfax District will present the West Coast debut of a sculpture exhibit titled “911: Vignettes of Emotion” by artist A. Thomas Schomberg.

San Diego State University’s Army Reserve Officers’ Training Corps (ROTC) will place 2,977 individual flags on the ground of the south end of Hepner Hall—representing each victim of the 2001 attack.

The memorial includes a moment of silence at 8:46 a.m., commemorating the moment the North Tower of the World Trade Center Complex was struck. At this time, the San Diego Fire Department will ring a bell 21 times recognizing the years that have passed since the attack. The remembrance event will feature several guest speakers and is open to the public.

In addition, Orange County Sheriff Don Barnes and Fire Authority Chief Brian Fennessy will speak at the Richard Nixon Library and Museum in Yorba Linda in a remembrance set to begin at 11 a.m.

Other events include a Patriot Day Paddle around Newport Harbor in Newport Beach.

On Monday, Pepperdine University will host an “Honoring the Heroes of 9/11” event, featuring Chancellor Sara Jackson and President Jim Gash. The university also has an annual display of nearly 3,000 flags in honor of the victims of the attack. The flags will fly on campus through Sept. 23.