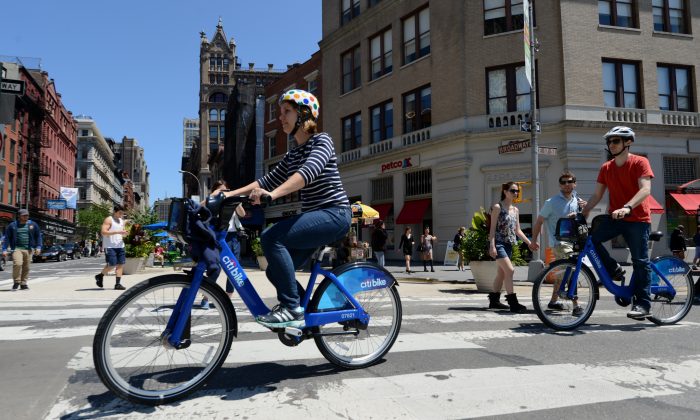 A couple ride their Citi Bike bicycles from a station near Union Square as the bike sharing system is launched in New York on May 27, 2013. (Stan Honda/AFP/Getty Images)
New York

NEW YORK—Since its launch in late May, the city’s bike sharing system has enjoyed overwhelming success, adding support not just for the program, but also for the city’s ongoing expansion of bike lanes, which make biking safer.

Riders have logged more than 8 million miles since the program’s launch, and it’s hard to stroll anywhere below 59th Street without spotting one of the bulky blue bicycles. At the current rate, there will be 100,000 annual members by mid-November.

In fact, it is Citi Bike users themselves who are most likely to support the system’s expansion.

A recent survey by Transportation Alternatives (TA), an advocacy group for safer streets for bikers and pedestrians, found that 91 percent of Citi Bike users want the system expanded.

They also want more bike-friendly street designs. And that desire is backed by a sizable demographic: Citi Bike members and New Yorkers who use their own bikes on a regular basis add up to an estimated 600,000 people. That’s more than the entire municipal labor force.

Out of the 1,000 Citi Bike users surveyed by TA, 84 percent feel safer in protected bike lanes. More than half of Citi Bike users also want the NYPD to make it a top priority to enforce the rules against parking in a bike lane.

“Absolutely,” said Duncan Rasor, 39, a Citi Bike member who mostly uses the bikes to get around his neighborhood near West 28th Street. “I would feel safer in a bike lane.”

Lav Savu, 40, set up a bouquet of flowers in a Citi Bike basket and was about to ride in a protected lane on Eighth Avenue for the first time since getting his Citi Bike membership.

“Going on the street is crazy,” Savu said about riding without a protected lane. “Because everyone double parks out there.”

Part of Citi Bike’s success can be attributed to Mayor Michael Bloomberg’s tenacious campaign to make the city’s streets more bike friendly in the years leading up to the system’s launch. More than 300 miles of bike lanes have been installed in the last five years. The DOT is installing lanes at a record rate before Bloomberg leaves office.

The impacts of bike lanes and street redesigns on rider safety are well documented. After bike lanes were installed on Ninth Avenue, injuries there dropped by 58 percent, according to the DOT. Meanwhile, even as bike ridership grew fourfold in the city over the past decade, the risk of serious injuries dropped by 75 percent.

“Bikes are convenient, safe and affordable transit for growing numbers of New Yorkers, and Citi Bike will change how we get around the city for years to come,” Department of Transportation Commissioner Janette Sadik-Khan said at the launch of the bike share on May 27.

New York City’s bike share was already the largest in the nation when it launched.

At the time, the Department of Transportation (DOT) said that it plans to expand its network of Citi Bike stations from 300 to 600, and to increase the number of bikes from 6,000 to 10,000.

If those plans are carried out, City Bike stations will reach to the Upper East and Upper West sides; Long Island City and Sunnyside in Queens; and Park Slope, Cobble Hill, Crown Heights, and Greenpoint in Brooklyn.