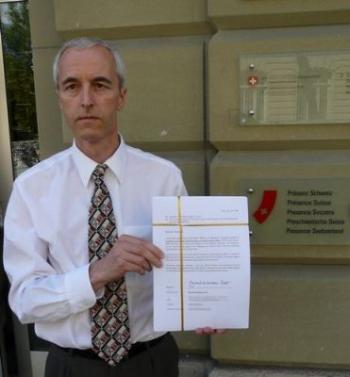 Eric Bachmann, a member of the CIPFG, shows the petition signed by leading politicians before they were handed over to the Swiss Federal Department of Foreign Affairs. (The Epoch Times)
Europe

BERN—The Coalition to Investigate the Persecution of Falun Gong in China (CIPFG) has handed in the results of the Global Million Signatures Campaign to the Swiss Government.

Certain Members of Parliament and some City Councillors from Switzerland have also signed the Petition to the United Human Rights Council (UNHRC).

The result of the Global Million Signatures Campaign which consists of 1,356,232 signatures was presented to the European Union in Brussels, to the IOC (International Olympics Committee) headquarters in Lausanne, Switzerland, to the national Olympics Committee in Japan and in Malaysia, to the Offices of the President and Prime Minister of Poland, to the Presidents Office of Slovakia, to the Presidents Office of the Ukraine, and to congressional members in various nations. More countries are to receive the petitions after they are sent to the UNHRC in Geneva.

Erich Bachmann, a member of CIPFG who made the submission to the IOC on July 25, 2008, said in the meeting, that at least 80 % of the people signed the petition after they learned about the persecution of Falun Gong practitioners in China. He said that shows public opinion clearly–people around the world want an immediate stop to the persecution. The UNHRC and governments around the world must do their utmost to help stop the persecution which started in July 1999, according to Bachmann.

Bachmann said that the IOC chairman was asked to sign the petition submitted by the UNHRC. CIPFG is expecting an answer from the chairman, Jaqcues Rogge, who is currently attending the Olympic Games in Beijing.

Mr Bachmann met with government officials Ms. Peneveyre and Ms. Mattei, and explained in detail about the unjust, nine-year long persecution of Falun Gong practitioners. The two Federal Civil Servants received the Nine Commentaries on the Communist Party and A China More Just and were asked to distribute them to each of the seven Federal Councilors of Switzerland..

A 'China More Just' tells the story of Lawyer Gao Zhisheng, one of China's most acclaimed human rights lawyers and a leading advocate for the oppressed in China. Gao Zhisheng was investigating the persecution of Falun Gong. He “disappeared” on September 22, 2007. The CIPFG was the last Human Rights Organization to interview Gao before his disappearance.