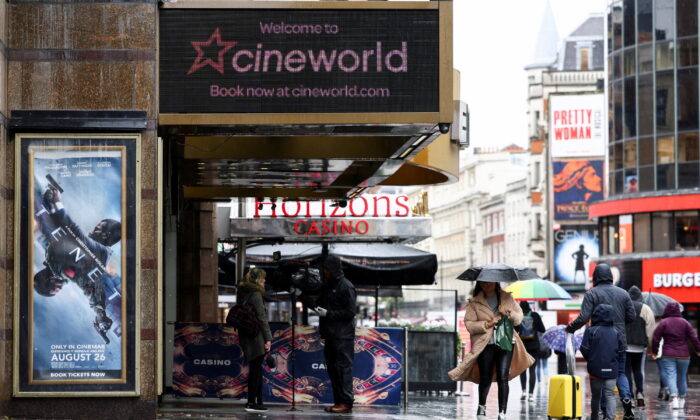 People walk past a Cineworld in Leicester Square during the COVID-19 outbreak in London, on Oct. 4, 2020. (Henry Nicholls/Reuters)
Companies

The United Kingdom-based cinema operator filed for a Chapter 11 filing to allow it time to restructure its debt and maintain operations, which will cover its U.S., U.K., and Jersey operations, where most of its business is located.

Cineworld expects to emerge from Chapter 11 protection during the first quarter of 2023, and will continue to pay all its vendors in full and its 45,000 employees.

“Cineworld would expect to maintain its operations in the ordinary course until and following any filing and ultimately to continue its business over the longer term with no significant impact upon its employees,” it said in its bankruptcy filing.

The chain operates 751 movie theaters, with more than 9,000 screens, in 10 nations worldwide.

Cinema chains have been struggling to recover their losses since the beginning of this year, after the pandemic forced them to close most of their theaters during the lockdowns.

“The pandemic was an incredibly difficult time for our business, with the enforced closure of cinemas and huge disruption to film schedules that has led us to this point,” said Cineworld CEO Mooky Greidinger in the filing.

Cineworld’s own finances deteriorated after moviegoers failed return to its cinemas in droves when indoor restrictions were eased, leading its share value to plummet.

It said it “will seek to implement a deleveraging transaction that will significantly reduce the group’s debt, strengthen its balance sheet, and provide the financial strength and flexibility to accelerate, and capitalize on, Cineworld’s strategy in the cinema industry.”

The movie theater company had already been accumulating massive amounts of debt over the years well before the pandemic, when it accumulated more trying to survive the lockdowns.

Cineworld’s takeover of Regal for $3.6 billion, in 2017, left it saddled with debt it took on in order to acquire the cinema chain, putting it in a bad position when the pandemic hit, according to some analysts.

Cineworld is still dealing with a legal dispute with its rival, Cineplex, which demanded $946 million in damages after an abandoned plan to acquire the Canadian-based chain two years ago.

Meanwhile, AMC has managed to raise more than $2 billion via sales of its so-called “APE” preferred stock to retail investors, avoiding the fate of its British rival, according to The Wall Street Journal.

Israel Greidinger, Cineworld’s deputy CEO, said that he regretted their failure to set up a similar “meme stock” fanbase in the bankruptcy protection filing.

“While Cineworld would, of course, have welcomed the liquidity of becoming a ‘meme stock’ like AMC, we were never so lucky!” said Greidinger.

Cineworld said that it does not expect to be delisted from the London Stock Exchange as a result of the Chapter 11 filing.

The cinema chain’s total debt, including lease liabilities, was $8.9 billion at the end of 2021, but $4.84 billion when excluding those liabilities.

The company said in its statement that it had $1.94 billion on hand from existing lenders, which will allow it to continue operating its cinemas around the world throughout the restructuring process.

Cineworld warned existing shareholders that their existing equity interests would likely be diluted as part of the bankruptcy process and that there is no guarantee that they will recover any losses.

“Any deleveraging transaction will likely result in very significant dilution of existing equity interests in Cineworld,” the company stated in a note to shareholders.

After hitting a record low of 1.80 pence a share after news broke in The Wall Street Journal of its bankruptcy plans last month, Cineworld shares rose 9.9 percent, to 4.29 pence on Sept. 7.

However, that is still down 87 percent from the start of the year, while its market value stood at about $68 million at the end of trading on Sept. 7.

Cineworld also has plans to change its real estate strategy in the United States by engaging with its landlords to improve lease terms for its Regal brand.

Bankruptcy filings show that the company is planning close 20 of its 505 Regal theaters, and could close more locations as it reviews the performance of each one.

The pandemic has left a “permanent scar” on the movie business, said former Disney Chief Executive Robert Iger, in remarks at the CODE Conference in Beverly Hills, Calif., on Aug. 17.

“It won’t go away, but it doesn’t come back to where it was,” he said sadly.

Other cinema chains, including Pacific Theatres, Alamo Drafthouse, Studio Movie Grill, and Cinemex, have also filed for bankruptcy protection due to the pandemic-based lockdowns.