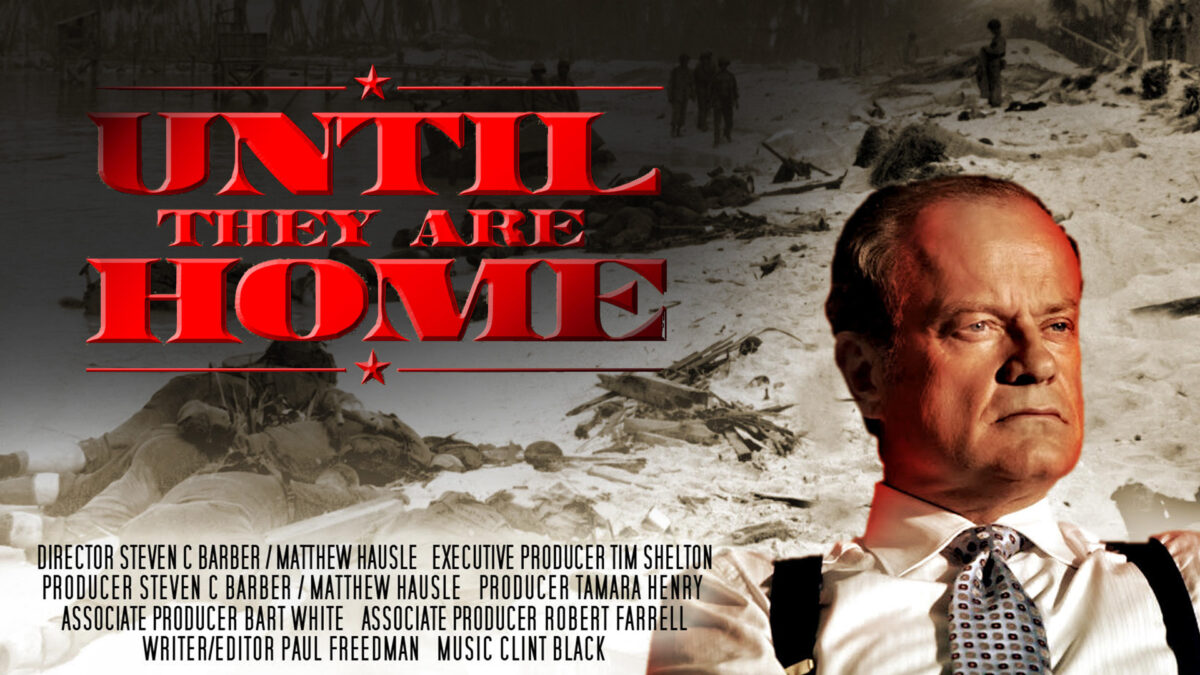 “Until They Are Home.” (Vanilla Fire Productions)
EpochTV Reviews

Cinema Film Review: ‘Until They Are Home’

A documentary about the search & recovery of missing service members.
BY Ian Kane TIMEMay 29, 2022 PRINT

From the outset, I could tell that this would be a gut-wrenching film to watch. The filmmakers meet with former U.S. Marine (USMC) Eddy Albert at his Los Angeles home to interview him. Despite being senile and having a hard time hearing, Albert modestly describes his wartime experience at the battle for the Pacific atoll of Tarawa, where Albert saved the lives of dozens of fellow Marines who were stranded there. Former U.S. Landing Craft Officer Leon Cooper, and Marine photographer Norman Hatch, are next to give us their accounts of this little-known World War II conflict zone.

Although Tarawa is an island parcel of land that is less than one-third the size of New York City’s Central Park, it had on it a strategically placed 4,000-foot long airfield landing strip that could then be used as a forward base of operations. From it, air power could be projected to many key locations throughout the Pacific Theater of World War II.

But the entire island had already been taken over by the Japanese, who were well dug in and not about to give it up without a serious fight. Thus, when the Marines came to take it over via amphibious assault boats (Higgins boats), the island became one of the bloodiest battles of World War II.

When the smoke finally cleared from the 3-day-long siege of the island, the Marines had won—but at what cost? A total of 6,000 Marines and Japanese soldiers had lost their lives in the pitched battle. Marines that had been in the initial assault waves had suffered the brunt of the causalities and were buried in mass graves to prevent disease from spreading.

As we listen to Kelsey Grammer’s baritone narration, we are introduced to the Joint POW/MIA Accounting Command (or JPAC for short), based in Honolulu, Hawaii. The organization works on the more than 84,000 still-unaccounted for United States service member deaths. Through their hard work and dedication, JPAC manages to close about 100 cases per year.

One of JPAC’s cases involves traveling to the now-developed island of Tarawa to try to find human remains in order to bring closure to American families. Grammer proudly exclaims that no other country on earth dedicates as much time and resources to reclaiming its war dead as the United States.

Although the film’s co-directors, Steven Barber and Matthew Hausle, briefly touch on other combat theaters during World War II, their main focus is on Tarawa since it is lesser-known. As General James Amos, Commandant of the USMC explains, before the Marines landed on Tarawa, none of them could have known that they’d find themselves in such an “epic battle.”

Much of this fascinating documentary’s story is told through the numerous interviews of a small group of surviving Marines who were there on the beaches of Tarawa during World War II, as well as several JPAC team members. Like the Marine Veterans, you can see the intense dedication that the JPAC members have for their mission—theirs being to recover the remains of America’s war dead left behind in foreign lands, and provide much-needed closure for families.

But perhaps the most touching story here is the one about the late, great Eddy Albert. In his last screen appearance, he talks about how he was part of a rescue effort to help recover the dead and wounded Marines off the coast of Tarawa, but modestly downplays his role.

Since the coral reefs prevented many of the Higgin’s boats from reaching the shores, the Marines were sitting ducks for the entrenched Japanese who picked them off as they swam toward the beaches.

Albert had been tasked by his commanders to recover lost equipment from the shores and take anything he found back to the ships. However, after seeing all of the dead and wounded just off-shore, Albert disobeyed orders and began rescuing stranded Marines while under enemy fire. During his interview, he displays incredible modesty, despite the fact that he saved dozens of lives and was awarded a Bronze Star for bravery.

It’s unfortunate that many of these lesser-known but equally important battles have largely been forgotten. If one mentions Normandy or Dunkirk, people usually recognize those theaters of World War II—but the numerous smaller places like Tarawa have rarely been covered, and are gradually fading into obscurity. Thank God we have documentaries such as this to remind us of these lost battlefields.

‘Until They Are Home’