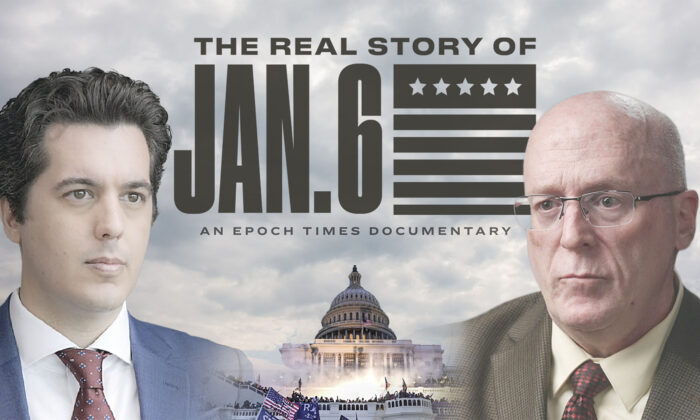 “The Real Story of January 6.” (The Epoch Times)
EpochTV Reviews

A refreshingly insightful documentary about the January 6th event

The Jan. 6 event has left many people scratching their heads. Harsh punitive measures were not only used against protestors in the wake of the mass gathering but many extreme measures were used against them on that very day. In The Epoch Times’ new documentary “The Real Story of January 6,” hosted by lead investigative reporter Joshua Philipp, we get to see some of the lesser-known facets of the event.

One of Philipp’s first interviews is with Stan Kephart, who has 42 years of experience in law enforcement and is one of the nation’s leading experts on police use of force. Kephart noted that not only were there no supervisors on hand for the cops assigned to the Capitol detail on Jan. 6, but they were improperly firing munitions down into the crowd from elevated positions.

Since the crowd was packed very tightly in many of the areas the police were shooting into, the protestors’ heads became the primary targets. These munitions were inexplicably being used on peaceful protesters merely standing in the crowd, not rushing the barricades between the crowd and the police. In other words, the police were firing projectiles capable of taking out people’s eyes (or causing other severe injuries) without any cause or provocation.

Kephart also mentions that tasers were being deployed and shot into people’s bodies. But instead of arresting people who had been neutralized, the weapons were being used in a punitive fashion, which is illegal. “It’s not only a failure of training but also a failure of bystandership and supervision,” Kephart states.

Explosive devices, such as gas dispersion grenades, were another weapon being thrown into the crowd. Such devices could have permanently blinded bystanders or caused severe hearing problems—for life. Naturally, this caused the crowd of protestors to become angry.

Accordingly to Kephart, all of these punitive actions by the cops on hand were not only “wrong,” they were “sadistic.” As a result of these police actions, a couple of gentlemen experienced cardiac events and were transported to medical facilities where they later passed away.

One woman named Victoria White was inadvertently shoved into a tunnel under the Capitol by the protestors. Although she had no intention of being there and was trying to extract herself from being wedged into the tunnel, a police officer struck her repeatedly in the head with a “metal baton.” Since she was in a partial state of shock, she thought she’d only been struck several times. However, when she later watched video footage of the assault, she counted many more times that she had been hit heavily in the head. She was also called the B-word and punched in the face with a closed fist by the same cop using the baton on her. White, a mother of four children, suffered severe injuries as a result of the assault.

Ashli Babbitt, a small white female who served her country honorably in the U.S. Air Force, was shot and killed by a Capital Police Officer named Michael Byrd. Babbitt was transported to a local hospital but later died from Byrd’s bullet. At first, the media tried to hide the identity of Byrd, but when he was finally ID’d, he was swiftly exonerated of any wrongdoing and even hailed as a hero by many leftists.

As Philipp explains, phrases would populate news sites immediately following Jan. 6. Terms such as “insurrection,” “treason,” and “stormed the capital” were relentlessly and unilaterally pushed by the corporate media outlets. All of this frenzied media coverage led Philipp to an interesting question—why was there such a huge media blitz about the Jan. 6 protest?

To answer that question, Philipp seeks out top political commentator and leading journalist Julie Kelly, senior writer at the news publication American Greatness. According to Kelly, certain political forces got away with the whole Russia Gate hoax, so they felt emboldened to commit more crimes. This resulted in a joint session of Congress proceeding to install Joe Biden and Kamala Harris into the White House. But the media frenzy about Jan. 6 also served another underlying purpose—to take attention away from both the failed Russia-Trump collusion narrative as well as the allegations of election fraud in the 2020 election.

Kelly adds that the Jan. 6 protest also allowed these same nefarious political forces to conveniently vilify two groups, the Oath Keepers and the Proud Boys (both were on hand to provide security for the protestors), and attempt to link them to President Donald J. Trump—a strategy that failed thus far. This also allowed for conservative political dissent to be criminalized and to “finally drive a stake into the heart of the MAGA (Make America Great Again) movement,” as Kelly put it.

Since the Jan. 6 protest, hundreds of people have been hunted down on arrested by numerous law enforcement agencies for their involvement in it. Many of these folks, such as Matthew Perna, faced decades in prison. Perna, a kind-hearted individual, cracked under the pressure of facing hard time after having his rights violated, and committed suicide in prison. Geri Perna, Matthew’s aunt, notes that on the other side of the coin, real criminals are running around committing all kinds of crimes, such as blatant daytime robberies and the looting of stores in the nation’s cities, and not being arrested.

As Philipp states at the conclusion of this illuminating documentary, “America needs answers on why the main instigators (of January 6th) are not charged,” and that the crimes on all sides need to be treated with equal measure.

“The Real Story of January 6” is a well-produced and greatly researched, highly revelatory documentary that sheds some much-needed light on the events on (and after) the Jan. 6 protest, and more importantly, asks some very valid questions.

‘The Real Story of January 6’

Ian Kane is a filmmaker and author. To learn more, visit iankanebooks.com/or contact him on Instagram @dreamflightent.