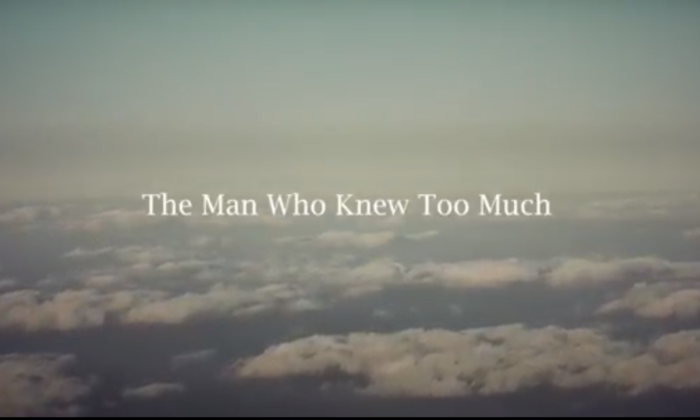 Cinema Documentary Review: ‘The Man Who Knew Too Much: Spies, Fake News, and Disinformation’

“The Man Who Knew Too Much: Spies, Fake News, and Disinformation.” (NTD)

An insightful documentary about the cloak and dagger world of intelligence agencies.

There aren’t a lot of documentaries out there that reveal the inner workings of British intelligence operations in Northern Ireland during the Cold War. Directed by Michael Oswald, the 2020 film “The Man Who Knew Too Much: Spies, Fake News, and Disinformation” changes that trend with an excellent expose of that murky world through one particular British spy’s life—a man named Colin Wallace.

The documentary begins in Northern Ireland, where long-running tensions had risen to a boiling point in 1969. Rampant violence broke out between Protestants loyal to the British Crown, and Catholics, as well as communists linked to the paramilitary organization known as the Irish Republican Army (IRA).

As a response to this civil unrest, an information warfare department known officially as the Information Research Department, or IRD, was set up inside the British Army’s Northern Ireland headquarters at Lisburn. The IRD was a clandestine Cold War department within the British Foreign Office.

Colin Wallace, a young British Army officer at the time, was tapped to join the IRD because of his extreme intelligence and dedication to duty. He became the Assistant Information Officer for the IRD’s new office at the Thiepval Barracks in Lisburn.

The IRD had full access to the British press, including its various publications. Therefore, since Northern Ireland was one of the “most surveilled” areas in the world in the 1960s and 70s, the IRD, via the press, could report on suspected IRA members, as well as communist infiltrators. The communists were believed to have come over directly from the Soviet Union to aid the IRA in its various operations.

However, the IRA was also adept at intelligence and counter-propaganda, and through various means, began to frame the IRD as being vicious thugs who tortured suspects that they’d detained. But Wallace, having grown up in Ireland and being familiar with the IRA’s various tricks, dismissed these allegations of brutality.

Wallace goes on to say that the interrogation techniques utilized by the IRD were far less severe than those they used for training purposes on its own British Army personnel. According to Wallace, the IRD instead prioritized spreading propaganda about the IRA as a way of sowing dissension and confusion amongst its ranks.

These psychological operations were also designed to drive wedges between the IRA and the communities that traditionally supported the latter—since the IRA had always depended on local communities in order to, as intelligence historian Rory Cormac states, “remain a viable organization.”

Wallace also describes how the various journalists they worked with were both very professional and typically ethical. For instance, when he and other British intelligence personnel would meet with journalists, Wallace, and his cohorts would inform said journalists about certain bits of information, but these would be strictly off-record. Therefore, the journalists knew they actually couldn’t officially report on the information, and didn’t. Had they done so, Wallace and the rest of the IRD wouldn’t have trusted them with any further information.

As the terroristic actions of the IRA ramped up over time, Wallace and the IRD began to intensify their psychological operations against the paramilitary group. This involved such things as Wallace and his cohorts faking ritualistic sacrifices throughout the countryside, which would lead to the IRA.

These actions, in turn, made the protestant population even more fearful of the IRA. Wallace goes on to say that they engaged in these sorts of tactics because they weren’t fighting a conventional war—but one against terrorists. Therefore, unconventional means had to be applied by the IRD.

Later, the IRD’s scope expanded to subjects beyond terrorists—such as politicians and other people of influence. It eventually began to culminate in smear campaigns against members of the three main political parties in Britain. As Wallace got deeper and deeper into this murky world of questionable psychological operations, he became the target of very powerful forces.

I felt that this was a very well-produced documentary that accurately traces the formation of Britain’s Information Research Department, and the role it had, at least initially, in spreading propaganda and engaging in psychological operations against terrorist organizations.

However, as the documentary reaches about the halfway point, things become a little confusing—maybe because of how quickly its scope suddenly expands. Some of the details of Wallace’s relations with various intelligence agencies and high-powered individuals also aren’t as clear as I would have liked them to be. But perhaps this is more due to the documentary’s short length than anything else, and hence, a limitation of time to properly detail many facets of the events that transpired.

As it is, “The Man Who Knew Too Much: Spies, Fake News, and Disinformation,” is an informative expose about the inner workings of the cloak and dagger world of spies and disinformation, while also stressing the importance of ethics in journalism.

‘The Man Who Knew Too Much: Spies, Fake News, and Disinformation”