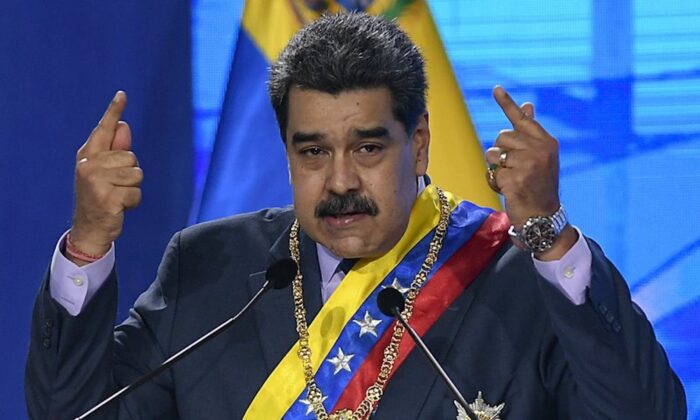 Venezuelan President Nicolás Maduro speaks during a ceremony marking the start of the judicial year at the Supreme Court in Caracas, Venezuela, on Jan. 22, 2021. (Matias Delacroix/AP Photo)
World

The CIA is exercising its state-secrets privilege in an ongoing effort to conceal its connections to former Venezuelan Gen. Clíver Antonio Alcalá Cordones, who’s accused of participating in a narco-terrorism conspiracy with the country’s leader, Nicolás Maduro.

According to the Department of Justice (DOJ), Cordones conspired with Maduro, other top Venezuelan regime officials, and members of Colombia’s Fuerzas Armadas Revolucionarias de Colombia (FARC) to ship cocaine to the United States. Cordones and the others did so for roughly two decades to fund their operations, as well as to “undermine the health and well-being of our nation,” U.S. Attorney Geoffrey Berman said when announcing the charges in March 2020.

According to Cordones, the former general was one of the rebels who tried to overthrow Maduro in March 2018. The Venezuelan government learned of the coup and crushed it, leading Cordones to flee to Colombia, he said in a court filing.

On the eve of a second coup attempt in 2020—which also failed—Cordones said he was contacted in person by a U.S. law enforcement official, who informed him about the narco-terrorist indictment.

“The agent informed General Alcalá Cordones that he could either board a private jet bound for New York, or be held in a Colombian jail, where he would no doubt be targeted by the Venezuelan intelligence services for assassination,” the motion reads. “Left with little choice, General Alcalá Cordones agreed to accompany the agent back to the United States.”

To prove his claims, Cordones asked U.S. Judge Alvin Hellerstein on Jan. 29 for an order that would require the U.S. government to produce thousands of records about his anti-Maduro activities over the past several years.

“We have reason to believe that reports of General Alcalá Cordones’ activities were communicated at the highest levels of a number of U.S. government agencies, including the Central Intelligence Agency (CIA), Treasury Department, the National Security Council, DEA [Drug Enforcement Agency], and DOJ,” the motion reads.

“Such evidence casts doubt on the government’s theory of prosecution and, to the extent the government is able to prove such a conspiracy, would support a defense of withdrawal from any such conspiracy.”

The DOJ opposed Cordones’ motion in a Feb. 8 filing, asking Hellerstein for a protective order that would keep any U.S. government documents about Cordones under wraps. The reason the government wants to keep this information secret isn’t clear, as the DOJ’s arguments were filed under seal.

“Accordingly, it is ordered that the government motion is granted, and the classified materials … need not be disclosed to the defense.”

Cordones responded on Feb. 25, urging the judge to schedule a hearing to review the CIA’s records on the former general behind closed doors.

“In an in camera and ex parte conference, the defense would present to the Court detailed information about General Alcalá Cordones’ interactions with the United States government, including with the Central Intelligence Agency (“CIA”) and other intelligence agencies that is relevant to the allegations in the indictment,” the defense stated.

“General Alcalá Cordones should be permitted … to make a presentation to the Court as to the reasons why categories of potentially classified evidence may be relevant.”

An oral argument over the matter is scheduled for March 15.

The DOJ and DEA declined to comment, while the CIA and Treasury Department didn’t respond by press time to requests for comment.