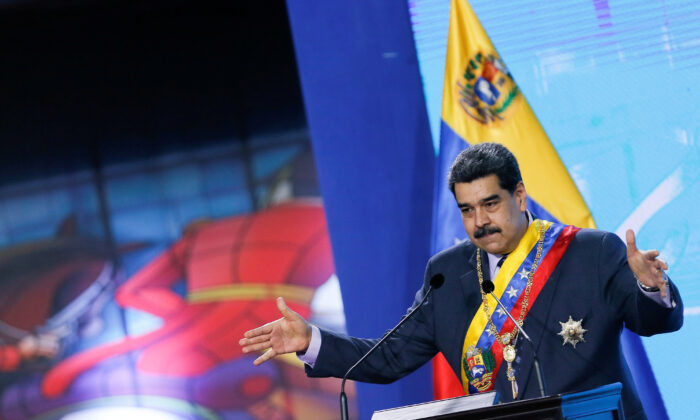 Venezuela's President Nicolas Maduro speaks during a ceremony marking the opening of the new court term in Caracas, Venezuela, on Jan. 22, 2021. (Manaure Quintero/Reuters)
US

A former Venezuelan general accused of participating in a narco-terrorism conspiracy with the country’s president, Nicolás Maduro, says there’s no way he participated in such a scheme.

After all, how could Clíver Antonio Alcalá Cordones have conspired with Maduro when the CIA knows he was one of the rebels working to overthrow Maduro’s socialist government?

This was the argument put forth by attorneys for Cordones in a Jan. 29 motion to dismiss narco-terrorism, corruption, drug trafficking, and other criminal charges against him.

According to the Department of Justice (DOJ), Cordones conspired with Maduro, other top Venezuelan regime officials, and members of Colombia’s Fuerzas Armadas Revolucionarias de Colombia to ship cocaine to the United States. The defendants did so for roughly two decades to fund their operations, as well as to “undermine the health and well-being of our nation,” U.S. Attorney Geoffrey Berman said when announcing the charges in March 2020.

But, according to Cordones, the DOJ has offered little evidence to tie him to Maduro’s plot.

“The allegations in this case are equal parts stunning and underwhelming, both in scope and in content,” attorneys for Cordones said in their Jan. 29 motion to dismiss, adding that their client is protected by sovereign immunity from the specific allegations against him.

That should be enough to dismiss the charges against Cordones, his motion argued. But if not, the government must produce thousands of records about the case against Cordones, including information that purportedly shows his anti-Maduro activities over the past several years, the motion states.

“We have reason to believe that reports of General Alcalá Cordones’ activities were communicated at the highest levels of a number of U.S. government agencies, including the Central Intelligence Agency (CIA), Treasury Department, the National Security Council, DEA [Drug Enforcement Agency], and DOJ,” the motion states.

“Such evidence casts doubt on the government’s theory of prosecution and, to the extent the government is able to prove such a conspiracy, would support a defense of withdrawal from any such conspiracy.”

The details of Cordones’s alleged anti-Maduro activities read like a spy novel.

According to the motion, Cordones joined the Venezuelan military at age 17, serving for 30 years before retiring when President Hugo Chavez died in 2013. Cordones doubted that Maduro would be an effective leader, and was “suspicious of Maduro’s fidelity to the democratic ideals that General Alcala Cordones had supported in his long career.”

“As such, he declined Maduro’s offers of two separate embassy-based positions and retired from the army just four months after Maduro took office, which coincided with his achieving 30 years of military service,” the motion states.

The motion described Cordones as a “notorious foe” of Maduro over the next few years.

“General Alcala Cordones’s opposition to Maduro soon escalated, and by 2017, with the knowledge of the United States government, General Alcalá Cordones began actively planning his first attempt to remove Maduro and his cronies from office through military intervention,” the motion states. “These were not theoretical debates about democratic change, these were plans for armed insurrection against a regime and its leadership.”

The first such attempt was planned for March 2018, but the Venezuelan government learned of the plan and crushed it. Cordones fled to Colombia, where he would continue to participate in anti-Maduro activities, according to his filing.

On the eve of a second coup attempt in 2020—which also failed—Cordones said he was contacted in person by a U.S. law enforcement official, who informed him about the narco-terrorist indictment.

“The agent informed General Alcala Cordones that he could either board a private jet bound for New York, or be held in a Colombian jail, where he would no doubt be targeted by the Venezuelan intelligence services for assassination,” the motion states. “Left with little choice, General Alcala Cordones agreed to accompany the agent back to the United States.”

The motion states that Cordones has requested records since November 2021 regarding the U.S. government’s knowledge that he participated in two coup attempts against Maduro. Cordones has received no such records, which is why he said he’s seeking a court order for production.

“The Court should order the government to produce all material related to General Alcala Cordones’s planning and coup attempts against the Maduro,” the motion states. “We have demanded production of such material in that it is directly probative of the defense case, and we ask that the Court specifically order its production.”

Prosecutors have yet to respond to the filing. The DOJ and DEA declined to comment. The CIA and Treasury Department didn’t respond to requests for comment.

In a September 2018 article about the coup plot in Venezuela, The New York Times reported that U.S. officials met with Venezuelan rebels, but denied their appeals for support.

“The main request of the military plotters was encrypted radios, which they planned to use to communicate among themselves in order to capture Mr. Maduro and his lieutenants,” the NY Times reported, citing interviews with unnamed U.S. officials and a Venezuelan former military commander.

“But the United States never granted the request, and after multiple meetings, the Venezuelans became frustrated.”

After the second coup attempt against Maduro failed in 2020—this one involving at least two former U.S. soldiers fighting as mercenaries—then-President Donald Trump denied any connections to the plot.

“Whatever it is, we’ll let you know,” Trump told reporters at the time. “But it has nothing to do with our government.”