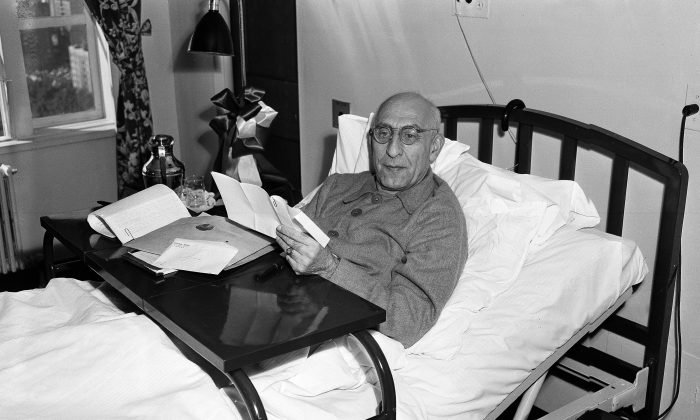 Premier Mohammad Mosaddeq of Iran lying in bed and reading letters and documents presented to him on October 12, 1951 in New York. (AP Photo)
Middle East

CIA Admits It Was Behind Iran Coup

The CIA has formally acknowledged that it was behind the coup of Iranian Prime Minister Mohammad Mosaddeq in 1953.

The acknowledgement was obtained by the National Security Archive and published on August 18.

“American and British involvement in Mosaddeq’s ouster has long been public knowledge, but today’s posting includes what is believed to be the CIA’s first formal acknowledgement that the agency helped to plan and execute the coup,” said the Archive.

Agency officials have previously said that CIA documents about 1953 are rare and most records were either lost or destroyed in the 1960s.

Mossadeq was a democratically elected prime minister of Iran from 1951 to 1953, when his government was overthrown through the coup. His successor, said to have been chosen by Britain’s MI6 and the CIA, was Fazlollah Zahedi, an Iranian general. General Zahedi had resigned as minister of interior in 1951 because of the criticism he received in handling a demonstration, according to the CIA history.

The Battle for Iran focuses much, at least in the first portion, on the oil situation in the country, which involves both Great Britain and the United States, and dates back to at least 1872, where the document begins.

According to the document, the Shah of Persia, Nasir al-Din, “in return for much needed cash” gave to German entrepreneur Baron de Reuter a concession to exploit all his country’s minerals, except for gold, silver, and precious stones.

Although de Reuter didn’t find oil, it was found through his successor, a British speculator named William Knox D’Arcy who sold shares in “The First Exploitation Company” and quickly started two oil producing wells by 1904.

The relationship between the British and the Persians began deteriorating after World War I, with an argument over how the oil profits were to be divided. In 1932 the concession was annulled and a new one was drawn up. (Also, in 1935 Persia was renamed Iran).

While Iran supplied the allies with oil throughout World War II, labor strikes and more complaints greatly impacted the situation in the late 1940s. Shortly after a new contract was signed in 1949–giving Iran a 20 percent share of distributed income instead of the 50 percent share the country’s leaders sought–the election took place that saw Mossadeq come into power. Mossadeq’s National Front party was intent on nationalizing oil and disputes from Iranian oil workers led to martial law in 1951. Shortly after that, the Shah signed a law that ordered the government takeover of the company getting oil from Iran, leading much more deterioration of the British and Iranian relationship, culminating in January 1952 when Mossadeq ordered all British consulates closed and closing all foreign information and cultural centers soon after.

Iran asked for a loan from the United States to help get the oil industry running smoothly without outside help, but President Dwight Eisenhower denied the request. The next action was the August 1953 coup that overthrew Mossadeq. Afterward, the oil dispute was “settled along the lines that had been proposed to Mossadeq–the oil industry was nationalized, but its operations were directed by a group of foreign oil companies.” Herbert Hoover Jr. acted as special oil adviser to the Secretary of State and played a key role in the negotiations, according to the CIA.

In its description of Mossadeq, the CIA focuses much on the way he dealt with Britain. After Reza Shah had held power for 20 years by appealing to latent Iranian nationalism, “Mossadeq used this awakened nationalism and the desire for independence to keep himself in power and to defy Britain,” the CIA said in the document.

The documents also include several pieces of propaganda commentary prepared by the CIA that attempted to make Mossadeq look bad.

About one of the pieces, titled Mossadeq’s Spy Service, the Archive says:

“This propaganda piece accuses the prime minister of pretending to be ‘the savior of Iran’ and alleges that he has instead built up a vast spying apparatus which he has trained on virtually every sector of society, from the army to newspapers to political and religious leaders. Stirring up images of his purported alliance with ‘murderous Qashqai Khan’ and the Bolsheviks, the authors charge: ‘Is this the way you save Iran, Mossadeq? We know what you want to save. You want to save Mossadeq’s dictatorship in Iran!'”

In addition, there is a draft text for a State Department statement for after the coup that predates Mosaddeq’s ouster by two weeks.

Find Version A and Version B (the new version) of the Battle for Iran, as well as another document detailing the fall of Mosaddeq, below and the rest of the documents here.