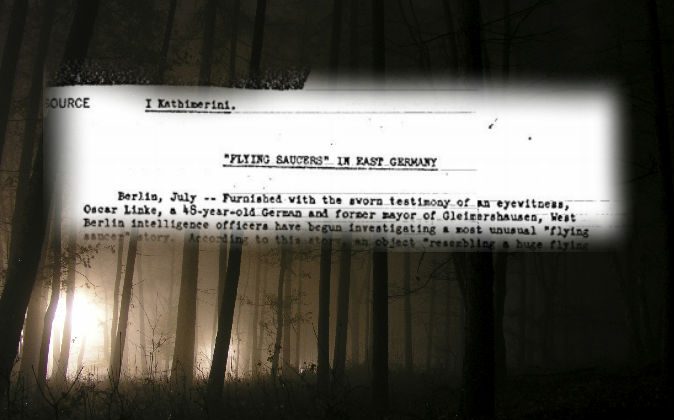 This was a period of intense CIA interest in unidentified flying objects (UFOs). Around the same time, the Air Force recorded 12,618 sightings, of which 701 remain “unidentified,” as part of Project Blue Book.

Former CIA Chief Historian Gerald K. Haines is quoted by the CIA as saying: “While the Agency’s concern over UFOs was substantial until the early 1950s, CIA has since paid only limited and peripheral attention to the phenomenon.”

One of the cases is titled “Flying Saucers Reported Over East Germany, 1952.”

Former mayor of Gleimershausen, Germany, Oscar Linke reported a UFO sighting. The report reads: “According to this story, an object ‘resembling a huge flying pan’ and having a diameter of about 15 meters [16.5 yards] landed in a forest clearing in the Soviet Zone of Germany.”

An object ‘resembling a huge flying pan’ and having a diameter of about 16.5 yards landed in a forest clearing in the Soviet Zone of Germany.

The tire had blown on his motorcycle while he was riding with his 11-year-old daughter. As they were pulled off on the side of the road, he saw two men about 45 yards away.

He reported: “They seemed to be dressed in some shiny metallic clothing. They were stooped over and were looking at something lying on the ground.”

Linke moved closer, until he was about 10 yards away. “I looked over a small fence and then I noticed a large object whose diameter I estimated to be between 13 and 15 meters [14–16 yards]. It looked like a huge frying pan.

“There were two rows of holes on its periphery, about 30 centimeters [1 foot] in circumference. The space between the two rows was about 0.45 meters [17 inches]. On the top of this metal object was a black conical tower about 3 meters [10 feet] high.”

The two figures noticed him when his 11-year-old daughter called to him. They got into the machine. He’d noticed that one of them “had a lamp on the front part of his body which lit up at regular intervals.”

Part of the machine started to glitter, with green light that turned red. He heard a humming. The conical part moved from the top to the bottom of the object. It spun as it rose into the air, apparently surrounded by flames.

Linke later checked the ground where he had seen the machine and saw that it was freshly marked.

The report states: “Many other persons who live in the same area as Linke later related that they saw an object which they thought to be a comet.”

“I had never heard of the term ‘flying saucer’ before I escaped from the Soviet Union into West Berlin,” Linke said. “When I saw this object, I immediately thought that it was a new Soviet military machine.”