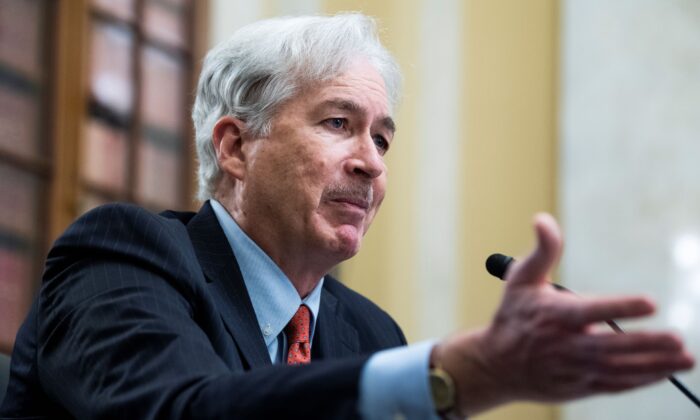 William Burns, then nominee for CIA director, testifies during his confirmation hearing, in Washington, on Feb. 24, 2021. (Tom Williams/Pool via AP)
Middle East

CIA Director William Burns said last week that the Taliban is engaged in offensive operations across Afghanistan and that the group is probably in its best military position in decades.

“The Taliban are making significant military advances; they’re probably in the strongest military position that they’ve been in since 2001,” Burns told NPR in a July 22 interview.

Burns’ remarks came in response to a question about purported warnings in a U.S. intelligence assessment, as reported by multiple media outlets in late June, that the Afghan government could collapse as soon as six months after the American military withdrawal from the country is completed.

The CIA director acknowledged the seriousness and urgency of the Taliban threat, repeatedly referring to the predictions as “trend lines” that he called “troubling.” At the same time, he cautioned against predicting the collapse of the Afghan government, which he insisted “retains significant military capabilities,” as inevitable.

“The big question,” he said, “is whether or not those capabilities can be exercised with the kind of political willpower and unity of leadership that’s absolutely essential to resist the Taliban.”

“The trend lines are certainly troubling,” he continued. “I don’t think that that should lead us to foregone conclusions or a sense of imminence or inevitability, but they really are worrying.”

Burns added that the Afghan military and security forces are in the process of trying to consolidate their positions, though how successful this will be hinges on the political will of the country’s top leadership.

At the same time, Burns said the United States would continue to support the Afghan military after the U.S. withdrawal.

President Joe Biden, who in April ordered the full withdrawal of U.S. forces from Afghanistan, was asked at a July 8 news conference in Washington whether he believes the Afghan government will fall and the Taliban will take over.

“It is not inevitable” that the Taliban will assume control of the country, said Biden, who like the CIA director noted that the Afghan military remains a force to be reckoned with. The president said that more than 300,000 members of Afghanistan’s military have been trained by U.S. forces over the past 20 years and that they have “all the tools and training equipment of any modern military.”

The Taliban’s leadership over Afghanistan was toppled in 2001 after the U.S. military action in the wake of the Sept. 11, 2001, terrorist attacks. The group was accused of harboring terror mastermind Osama bin Laden, who was killed during a raid about 10 years later in neighboring Pakistan.

Other U.S. military leaders have warned of a resurgent Taliban in the wake of the American pullout, with Gen. Scott Miller, the military commander directing the withdrawal, saying in late June that the security situation in the country had deteriorated.