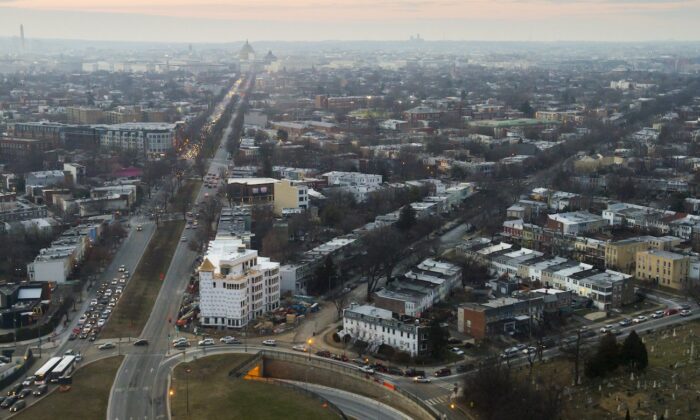 The Capitol Hill neighborhood at dusk in Washington in a file photo. (Saul Loeb/AFP via Getty Images)
AMERICA

A Washington, D.C., church has been awarded $220,000 after it filed a federal lawsuit challenging the district’s restrictions on gatherings at places of worship during the CCP virus pandemic.

Leaders of Capitol Hill Baptist Church (CHBC) have appealed to D.C. officials since Mayor Muriel Bowser’s restrictions were issued on March 11, 2020, which banned all indoor and outdoor church meetings of 100 or more, even if participants wear masks and social distance.

In a settlement (pdf) between the two parties signed on July 8, 2021, Mayor Muriel Bowser and her administration agreed to pay $220,000 to church lawyers at WilmerHale and the First Liberty Institute, a Plano, Texas-based law firm that specializes in First Amendment religious freedom litigation.

As per the settlement, the district “agrees that it will not enforce any current or future COVID-19 restrictions to prohibit CHBC from gathering as one congregation” in the district.

The district further agrees that, should it impose new restrictions on religious gatherings in the name of mitigating COVID-19 or variant thereof,  they will not be more restrictive than on “comparable secular activities, as defined by the Supreme Court,” the settlement states.

The district also agreed to pay the church’s legal fees.

Senior Pastor Mark Dever is a nationally known evangelical leader and the founder of the 9Marks organization, which provides ministry and administrative resources for churches across the nation, and has been at CHBC since 1994.

The 850-member congregation has held worship services every Sunday since 1878, except for three weeks during the 1918 Spanish flu epidemic.

“All Capitol Hill Baptist Church ever asked is for equal treatment under the law so they could meet together safely as a church,” said Hiram Sasser, executive general counsel for First Liberty Institute.

“The church is relieved and grateful that this ordeal is behind them. Government officials need to know that illegal restrictions on First Amendment rights are intolerable and costly,” he said, according to the Washington Times.

Lockdowns, which began in March 2020 in the United States, forced religious services, including those of Roman Catholic, Orthodox Jewish, and Pentecostal congregations, to come to a halt throughout the COVID-19 pandemic.

However, the forced closures became a sticking point when some jurisdictions imposed more severe restrictions on houses of worship than were placed on secular activities.

The Supreme Court struck down several prohibitions on religious gatherings during the crisis, and multiple states eventually began easing the restrictions and allowing houses of worship to open for in-person services, albeit with virus-related modifications in place.