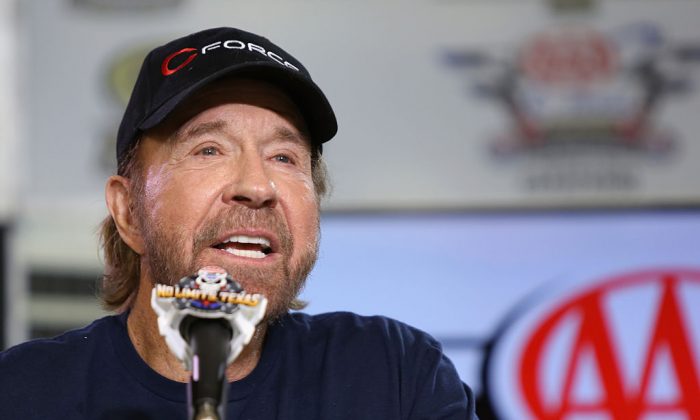 Actor Chuck Norris speaks with the media during a press conference prior to the NASCAR Sprint Cup Series AAA Texas 500 at Texas Motor Speedway on Nov. 6, 2016, in Fort Worth, Texas. (Jerry Markland/Getty Images)
Entertainment News

Chuck Norris is hitting CBS and Sony Pictures Television with a $30 million lawsuit.

The action star is suing the network giants for allegedly failing to pay him his share of the profits from the hit 90s show “Walker, Texas Ranger.”

According to the Hollywood Reporter, due to the actor’s growing fame and image recognition at the time, CBS agreed to give him 23 percent of all profits from “Walker.”

The suit claims that both CBS and Sony promoted the series through on-demand services (S-VOD) instead of TV and DVD, in order to exploit a loophole to avoid paying Norris his share.

“This 23 percent profit participation has been, and will continue to be, a valuable right because ‘Walker’ has been lucrative and popular in syndication, generating over $692 million in revenue to date,” writes attorney Scott Street in the complaint.

“But, on information and belief, as technology improved, the defendants focused less on marketing ‘Walker’ to television stations and DVD viewers and more on promoting the show on S-VOD services, some of which they owned or co-owned.”

Norris played the main character in the series as Texas Ranger Cordell Walker, which ran for a total of eight seasons on CBS between 1993 and 2001.

Top Kick said in the suit that the networks owed millions of dollars in “past and future license fees.”

“CBS was among the networks that were fully aware of Chuck Norris’s success, history, brand, and image, which resulted in CBS agreeing to become the primary distributor of ‘Walker,'” the suit stated.

“Instead, CBS and Sony materially breached the contractual duties they owed to Mr. Norris and his company Top Kick. Specifically, the defendants have consciously sought to market, sell and distribute ‘Walker’ in ways that are designed to collect significant fees and revenues from the ongoing exploitation of ‘Walker’ but without having to honor or pay Top Kick, and to instead materially breach the 23 Percent Profit Clause.”

Top Kick is suing for breach of contract and breach of the implied covenant of good faith and fair dealing.