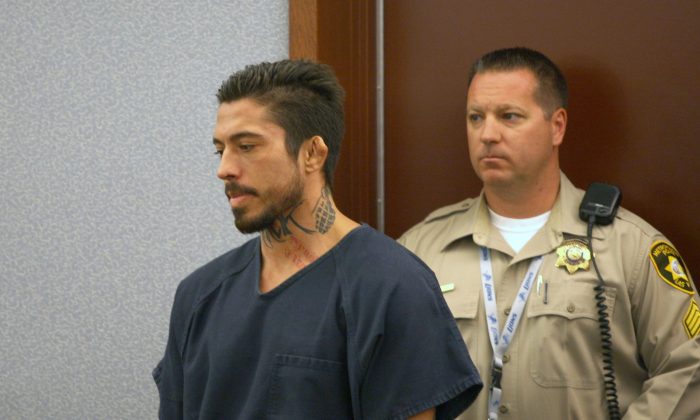 A preliminary hearing in the War Machine-Christy Mack case is scheduled for October 17.

Mack is expected to testify about the abuse she endured, allegedly from mixed martial arts fighter War Machine, whose birth name is Jonathan Koppenhaver.

Machine appeared in court this past week, facing charges from both the Mack situation and other incidents between May 2013 and August 2014, including allegedly violating his probation.

Koppenhaver started off his string of trouble with a guilty plea to an assault on a patron at a nightclub, Krave, where he worked as a bottle server. He later tried to withdraw the plea.

In the Mack case, Machine faces life in prison without parole on a slew of charges.

Meanwhile, Mack has been working on recovering from the attack, posting some photos showing various stages of her recovery on Instagram earlier this month.

She said that she’s had multiple dental visits in addition to other work done since the brutal attack.

“My multiple nose fractures will be fixed in the next couple of months. While they’re fairly symmetrical, my nose is shifted on the inside and out causing breathing issues. (I also make everyone feel how my bone sticks out on the left side because it feels so weird.) My top lip will regain movement in less than 6 months… looking forward to using straws again,” she said.

“My liver seems to be alright. I was admitted back to the hospital shortly after I was released the first time for some minor treatment, but I did not have to have surgery. While my face is starting to look decent again from the swelling going down, it is still not my own.”

But at an event for  nonprofit Face Forward, she told TMZ that she’s had great support from fans.

“I’m actually doing really well, healing really well,” Mack said. “I’ve got a lot of great support from my friends and my fans, so that’s definitely helping me a lot.”