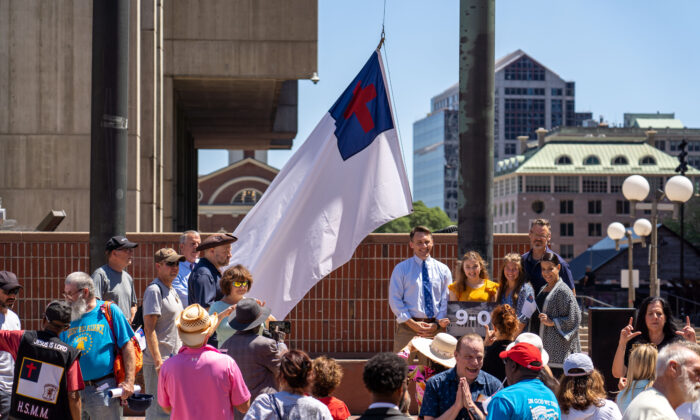 The Christian flag was raised over Boston’s City Hall Plaza on Aug. 3, marking a triumphant win for the conservative Christian group Camp Constitution following a legal dispute that has dragged on for years.

The Camp Constitution flag was hoisted up on Boston City Hall Plaza public forum’s flagpole at around 11 a.m., as a cheering crowd watched on.

Three flagpoles adorn Boston City Hall’s entrance and fly U.S., Massachusetts, and Boston flags but occasionally the Boston flag will be taken down and temporarily replaced with another one honoring or commemorating causes, individuals, historic events, or other foreign countries.

However, in 2017, Boston refused to let Camp Constitution, which offers classes and workshops on U.S. history and the Constitution, display a flag bearing a Christian cross to commemorate Constitution Day and Citizenship Day on Sept. 17.

At the time, the city said allowing the flag to be hoisted could “be projected as an endorsement by the city of a particular religion, contrary to the concept of  separation of church and state or the constitution’s establishment clause.”

That is despite Boston having approved 284 flag raisings by private organizations with no denials for 12 years from 2005 to 2017.

Boston resident Hal Shurtleff, who runs Camp Constitution, promptly took the case to the U.S. Supreme Court after being told by city officials that if he changed the name of the flag to a non-religious name on the application, it would have flown in 2017.

In May, now-retired Supreme Court Justice Stephen Breyer ruled that Boston “violated the Free Speech Clause of the First Amendment” when it refused to raise the Christian flag, and stated that it is not government speech.

The Supreme Court concluded that “on balance, Boston did not make the raising and flying of private groups’ flags a form of government speech. That means, in turn, that Boston’s refusal to let Shurtleff and Camp Constitution raise their flag based on its religious viewpoint ‘abridg[ed]’ their ‘freedom of speech.'”

Referencing the events that triggered the lengthy litigation, Shurtleff said: “Back in 2017, we wanted to have a simple ceremony to commemorate Constitution Day and Boston’s rich Christian history.”

“The speakers we had planned for that event are here today. I want to thank you, a special thanks to Liberty Counsel, and I want to give the glory to God … We have a great Constitution, and we have a wonderful First Amendment. But just like when it comes to muscles, if you don’t use it, you get weak. When I got the rejection email from the city, and it said separation for church and state, I knew we had a case.”

“The raising of this Christian flag today symbolizes the fact that the Christian community, the community of faith, across this whole country are not constitutional orphans. They are full heirs to the constitutional guarantees of freedom of speech and free exercise of religion along with every other American,” Mihet said.

Mihet, who is originally from Romania, added: “Having grown up in communist Romania, having witnessed a government that was determined to stamp out religious expression from the public square at all costs, my friends, we need to do everything and anything in our power to make sure that free speech and free exercise of religion always remains free and protected in this great land of ours.”

On Aug. 2, Boston Mayor Michelle Wu and city councilors filed an ordinance to update the city’s process for raising flags on City Hall Plaza, and groups who wish to fly their flag will now need either a proclamation from the mayor or a resolution from the council.