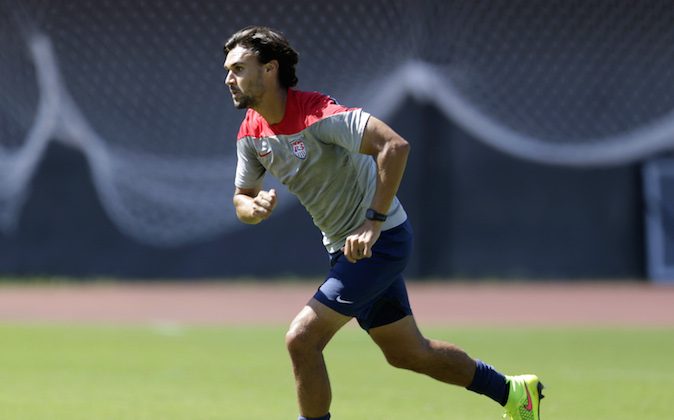 United States' Chris Wondolowski works out during a training session in Salvador, Brazil. Wondolowski, a member of the Kiowa Tribe, is playing in the World Cup. His presence on the U.S. soccer team is a source of pride for the tribe of 12,000 with headquarters in Oklahoma. (AP Photo/Julio Cortez, File)
Soccer

Chris Wondolowski, the son of a Native American mother, has emerged as a football star over the past few years and made Oklahoma’s tightly knit group of 12,000 Kiowa people care about a sport that never mattered to them before.

So the chatter at the Kiowa Tribal Complex was a bit unusual Monday afternoon.

Brent Bear, Keith Vasquez and Steve Quoetone went back and forth about the United States soccer team. Among the questions: Could the U.S. handle Belgium’s star-studded lineup in Tuesday’s World Cup knockout stage showdown? Would Jurgen Klinsmann use more of an attacking style or sit back?

Those kinds of questions, the men concluded, never would have been asked around here four years ago. But back then, the Kiowa didn’t have one of their own representing them on the most grand of sports stages.

“He’s become a hero to the Kiowa tribe,” Vasquez, a Kiowa spokesman, said. “He has a following around the area that’s gaining more and more as time goes by, and I hope that it progresses more than it has so far.”

There is no downplaying Wondolowski’s impact on the towns of Carnegie, Hobart, Lawton and Anadarko, in the southwest part of Oklahoma where most Kiowa live. Native American athletes rarely make it in big-time sports, and certainly not in soccer.

“I know there are a lot of kids that are willing to try the sport because there is a connection,” Wondolowski’s mother, Janis Hoyt, said.

Members of the tribe cheered loudly and waved American flags during a watch party as the U.S. played to a draw against Portugal during group stage action. They exploded into cheers when he subbed into the match in the 87th minute.

Though Wondolowski grew up in California, his mother, who is half Kiowa and half Cherokee, took him back to Oklahoma regularly to help him maintain a connection with his many relatives there. He received his Kiowa name, Bau Daigh, when he was 13 years old. It means “Warrior coming over the hill.” He has the name on a tattoo on his right ribcage.

“It was something he really felt was an identifier,” Hoyt said. “He’s not the type of person who does something like that just because it’s a trend.”

Those who saw Wondolowski as a child expected big things from him as an athlete. He also starred in baseball and track.

“He’s a humble person, but when it comes to being on the field or playing sports, he’s got to win,” Bear, Wondolowski’s uncle, said. “Some people have it, some people don’t. He had it, even at a young age.”

Wondolowski was becoming increasingly popular among the Kiowa well before the World Cup. He wasn’t a star player in Major League Soccer early in his career, scoring just seven goals in the first six years of his career. Then, he scored 18 goals for the San Jose Earthquakes in 2010 and won the Golden Boot for leading the league in goals. He scored 16 goals in 2011. The next year, he tied a league record with 27 goals and won the MVP award and the Golden Boot.

That’s when his people figured out that they had a special athlete proudly representing them.

“He’s exerted drive and tenacity to be better, and to be a winner, and I’m proud of that fact,” his grandfather, Bill Elliott, said. “I’m also very proud that he grew up to love his culture, love his family and be a good role model for young kids.”

Wondolowski’s success spurred the tribe to hold its first soccer camp last year. About 150 kids from around the area, mostly Native American, showed up. The Kiowa had their second camp the day of the United States’ match against Portugal, and they plan to expand into a league next year.

Honorees at the Kiowa camps earn “Wondo Awards.” Quoetone, who heads the Kiowa Nation’s Sports and Youth Activities Program, said because Wondolowski’s path was difficult, the awards don’t go to the best players.

“These are not the strongest, the fastest, the biggest — these are the ones that try the hardest that never quit,” Quoetone said.