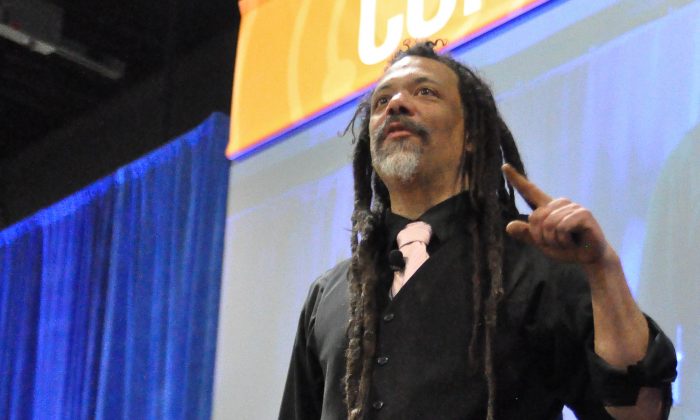 Chris Hackett on Why Zombies Fascinate Us, How to Survive the Apocalypse

WASHINGTON—Chris Hackett takes the energy of do-it-yourself (DIY) to a climactic, apocalyptic pitch.

“Why are you all into zombies?” Hackett asked the crowd at the USA Science & Engineering Festival in Washington, D.C., on Sunday. He answered his own question: “We need a shorthand for the end times.”

The “end times” will come more like “a whimper than a discreet bang,” Hackett predicted. He joked that zombies are a way of envisioning end times that caters to people’s “twisted sociopathic fantasies.” In a strange way, he said, we’re also drawn to the idea of an apocalypse because “we like that it’s a reset.”

Hackett teaches a way of thinking that could help you survive when all the things you rely upon are no longer so reliable. His tips could save you from zombies, or from languishing in the aftermath of a natural disaster.

A key point to remember: you can’t shop your way out of disaster. In zombie movies, the survivors seem to have an unlimited supply of ammunition and guns. “When the zombies take over, who’s making ammunition?” he asked. The example used is weaponry, but the logic applies to any other tools you may need in a post-apocalyptic world.

It’s about distilling the basic properties of these tools, then thinking of alternatives that could perform the same tasks.

“My vibe is making stuff out of the stuff that’s lying around. I detest the idea … that you can shop your way out of the zombie apocalypse,” he said. “Shopping is not the cure for anything. Learn stuff, because then you’ll be able to do stuff, because then you don’t have to rely on people, you don’t have to worry if your credit card still works after the zombies have eaten all the people at Visa.”

Stuff You Should Learn So You Can Do Stuff

What is a gun? At it’s core, it takes energy from one place (an explosion caused by mechanical force and gunpowder) and transfers it to another place (the bullet, which is then pushed out toward the target).

With this understanding, it’s easier to envision how to make a weapon without the conventional materials.

Chris Hackett shows his DIY battery gun made from a tank, a bike pump, and using AA batteries as ammunition. (Tara MacIsaac/Epoch Times)

Other quick tips from Hackett: You can use crazy glue if you need to stitch up a wound; stay put, don’t flee to the country.

The people who live in rural areas won’t want to accommodate those leaving the cities and suburbs. And it’s better to stay in the environment you know. “Hunker down,” Hackett said.

Remember, you’ll fail at first. On YouTube, we see all the cool things people have done, said Hackett. If people uploaded all the failed attempts that preceded those cool things, YouTube would be overwhelmed.