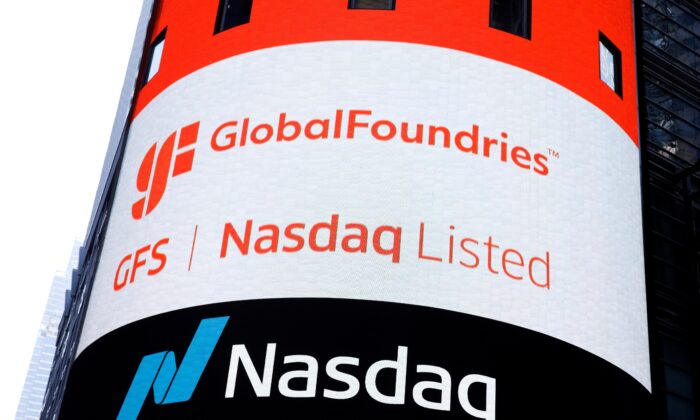 A screen displays the company logo for semiconductor and chipmaker GlobalFoundries Inc. during the company's IPO at the Nasdaq MarketSite in Times Square in New York City, U.S., Oct. 28, 2021. (Brendan McDermid/Reuters)
Markets

Shares of GlobalFoundries Inc, which is owned by Abu Dhabi’s sovereign wealth fund Mubadala Investment Co, opened flat on the Nasdaq on Thursday, giving the chipmaker a market capitalization of about $26 billion.

GlobalFoundries finished its first day of trading at $46.40, slightly lower than the $47 per share it priced in the initial public offering (IPO). The chipmaker raised $2.6 billion in the third-largest IPO in the United States so far this year, trailing South Korean e-commerce giant Coupang Inc and ride-hailing company Didi Global Inc.

GlobalFoundries, which disclosed revenue growth of 13 percent for the six months ended June 30, has benefited from surging demand for chips, due to a global shortage that has forced automakers and other electronics firms to cut production.

But the company’s gross margins remain markedly lower than other chipmakers at 10.8 percent in the six months ended June 30, well below the margins of 40 percent or more enjoyed by Taiwan Semiconductor Manufacturing Co or Intel Corp.

In an interview with Reuters, Chief Executive Thomas Caulfield said margins have already risen to 17 percent in the third quarter and are likely to rise more as the company invests $6.5 billion—some of which comes from Thursday’s IPO—in its factories.

He said those investments will help GlobalFoundries take advantage of brisk demand and that margins will keep improving “in the future quarters as we continue to build our capacity with these investments.”

Caulfield said demand is likely to remain high for years, with acute shortages lasting into next year. “I think it starts to get better in 2023,” he said.

Caulfield declined to comment on reported takeover interest from Intel earlier this year, saying the company is focusing on being “a standalone business” with a focus on developing radio-frequency (RF) and low-power technologies.

Despite the lukewarm stock market reception for GlobalFoundries on Thursday, the IPO market in the United States has never been stronger. Numerous other big names such as Coinbase Global Inc, Robinhood Markets Inc, and gaming platform Roblox have already gone public this year.

Electric-vehicle maker Rivian is also expected to list its shares in the coming weeks.

U.S. IPOs, including those of special-purpose acquisition companies (SPACs), have raised an all-time record of over $250 billion so far this year, according to data from Dealogic.

The company, which makes radio-frequency communications chips for 5G, automotive, and other specialized semiconductors, counts AMD and Broadcom Inc among its customers.

GlobalFoundries is the world’s third-largest foundry by revenue behind Taiwan Semiconductor Manufacturing Co Ltd and Samsung Electronics Co Ltd, but ranks second when stripping out Samsung’s foundry business that makes chips for other elements of the South Korean firm.

Mubadala, which has a majority stake in GlobalFoundries, will hold 89.4 percent of the company’s shares and voting power after the offering.

Funds affiliated with Silver Lake have bought nearly $75 million worth of shares as part of a so-called private placement held alongside the IPO.

By Stephen Nellis and Krystal Hu